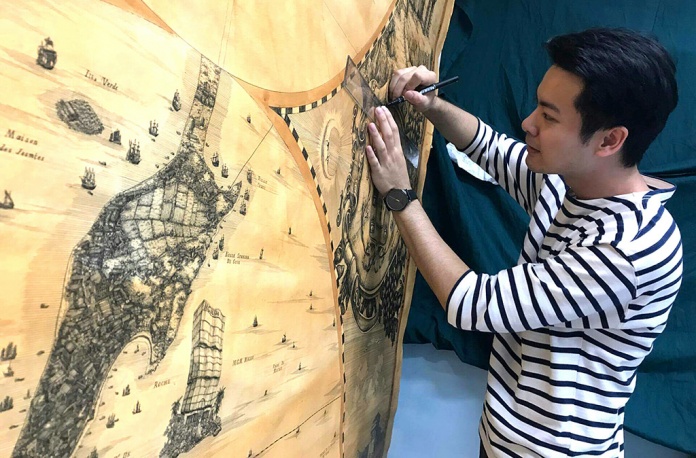 Macau is already too small to contain the talent of this ancient map designer, but he’d be the first to tell you: no place but Macau could have inspired his work.

Eric Fok may remain based in Macau in the future, but it’s written (in the stars?) that demand for the work of this artist, just 31 years of age, will increase – and his will be a global talent.

In fact, it already is.

His work, which has been featured in “The Illustrators Exhibition – Bologna Children’s Book Fair” (which toured as well through Italy and to New York, Japan, Mainland China, Hong Kong, Macau and Taiwan) and “Art Nova 100” (Beijing), has received the Portugal Oriental Foundation Art Award and has been acquired for the collections of The Orient Museum (Portugal), the University of Hong Kong’s University Museum and Art Gallery, the Macau Government Headquarters, the Macau SAR’s Cultural Affairs Bureau, the Fundação Oriente (Macau) and MGM Cotai and those of individuals in Italy, Las Vegas, the United Kingdom, China, Taiwan, Singapore, Hong Kong and, of course, Macau.

Eric was born in Macau in 1990. Though there is no artistic tradition in his family, he’d grown interested in painting by the age of 12, and while attending Xin Hua School, he spent his time drawing in school textbooks and taking exams with images instead of words. Unsurprisingly, he completed a degree in Visual Art at the Polytechnic Institute of Macau. Since leaving university he has worked as part of the Macau Museum of Art’s Educational Team and is an active participant in promotional campaigns for ART ZONE.

During his school career, he met whom he considers to be his greatest source of inspiration, Wong Ka Long, sculptor of Macau’s public statues of Jao Tsung-I, Luís de Camões and Matteo Ricci.

They first met during a summer sculpture course and, later, at Xin Hua School. Wong saw something special in him, and when asked if he had free time to help out in Wong’s studio, Eric agreed and became his assistant.

From that point on he made advancements in his art, reflected in the detailed and fascinating maps he draws with a technical pen. By integrating ancient maps with novel constructions, he’s created a combination of tradition and modernity.

In 2015 he quit his part time job giving a drawing class at the Macau Museum of Art, because he didn’t want to fall into a rut of repetition. “I know I have to keep learning.” So in 2016 he travelled to Florence to learn restoration and then to Taiwan to complete a Master of Fine Arts. “It was there I began to really understand why a young man from Macau would draw a map from that era – that’s the Macau element, it’s my memory, my City.”

After all it seems his success was written not in the stars, but in the name itself!