What can we compare with the crisis caused by COVID-19 in 2020? It will be said that no two crises are the same, but in the last 150 years, we have found two moments in which Macau truly trembled.

“At the end of the 19th century, an outbreak of bubonic plague of large scale in southern China, a strong epidemic that caused many deaths and was transmitted by an impressive number of people. The plague left in its wake a great death toll, with serious losses for the society,” Wong Ngan Hong, president of the Macau Association of Social and Cultural Studies, wrote.

“According to the report made in 1911, by the advisor of the Committee for Research Plague in India, Dr. C.J.Martin, who referred to bubonic plague in Guangdong, which then hit Hong Kong in 1894, was the most influential epidemic at the time,” the document reads. In March or April 1895, bubonic plague arrived in Macau, “with increasing intensity.”

A report by the Association of Schools of Public Health, released in 1910, said from 1895 to 1901, 6,387 people died of plague in Hong Kong; “it can be seen that, at the time, the disease was considered endemic,” stated Wong Ngan Hong.

From April to July 1895, there were 1,259 cases of bubonic plague in Macau. The majority of victims were ethnic Chinese. Among the dead, there were also Portuguese, other Europeans, Indians and Africans. The effects of the epidemic were still felt 10 years later. For 20 years, between 1895 and 1915, the disease continued to manifest. According to the report of Doctor Peregrino da Costa, from 1898 to 1909, Macau had 2,594 cases of plague.

Another scholar, Guo Weidong, analyzing the bubonic plague of 1895, found that government officials, traders and the people together resisted the plague, which gave rise to a special dynamic in society. “The crucial role in social interaction at the time of the 1895 plague in Macau was played by Chinese traders; it was they who, drawing on their economic power and social influence, on the one hand helped the Colonial Government by promoting the effective application of preventive measures and, on the other hand, supporting the needy Chinese community, ensuring the stability of Macao society as a whole,” wrote Mr. Guo.

…. to the humanitarian crisis caused by the Japanese

That same December, the Japanese occupied Hong Kong, an occupation that will last until 1945. There are records of bloody fighting.

Macau welcomes thousands of refugees, mainly Chinese, from Hong Kong and southern China, who remain in the Territory until the Japanese surrender in 1945.

The then Governor of Macau during the Pacific conflict and the military occupation of China and Hong Kong by Japan, managed to maintain the neutrality of the territory, through a modus vivendi with the Consulate General of Japan.

Even so, Macau was bombed five times by U.S. aviation in the first seven months of 1945, precisely because of this understanding with the occupying forces.

It turns out that the refugees had already started arriving in Macau before 1941.

Ten years earlier, Japan invaded China, and hundreds sought refuge in Macau. The Belavista Hotel is closed and starts to function as a reception centre. “Famines and epidemics create situations of the greatest misery,” reports historian Basto da Silva. “Macau is, in its physical and resourcefulness, a land of historical mission and mercy, the oasis of these refugees, to which others would be added, pushed by the Japanese presence in Hong Kong.”

A little over a year ago, she reminded the Portuguese-language newspaper Ponto Final “the bodies along the streets, early in the morning, when we went to classes, smashed and without the rags that would protect other wretched people” or the lack of food: “of course there was a lack of food; there was only rice and of poor quality, some of which my mother skilfully transformed into flour and invented recipes. Since we were a family of six, we had 90 kilos a month.” 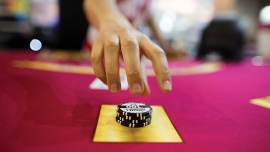