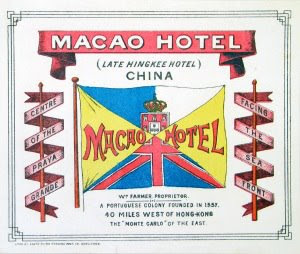 To combat the sinful image of gambling, a more neutral signature emerged: “East meets West” was a marketing cliché with political relevance, as current today as in the past

They base this conviction on the two advertisements published in the Hong Kong press by the new management of the Macao Hotel around the beginning of 1900 and on the title of the chapter on Macau in the book published in 1907 by Frederic Courtland Penfield: Macao, the Monte Carlo of the Far East.

Although at that time there were no casinos in Macau (rather lotteries and fantan), the image made sense and remained in force for many years.

However, the dilemma that still exists today about the role of gambling in Macau’s tourism promotion is at least a century old.

Portuguese historian Célia Reis cites the catalogue of the Seville World Exhibition (1929) denying Macau’s characterization as the Chinese Monte Carlo: “In other words, despite this previous designation, its dissemination at that time had now gained new connotations in the eyes of those responsible for the colony; against it, in addition to the traditional connection of the Chinese to gambling, the limitation of the opium trade following international conventions and the historical, natural and heritage aspects were highlighted.”

As researcher Glenn McCartney writes in a text about Stanley Ho’s role, “Reports on gambling between traders in Macau from those initial days have portrayed it in a rather negative light, coupling it with several vices and acts of violence that seemed to prevail.”

How to solve this dilemma?

Another, more neutral and comprehensive designation began to emerge, “East meets West”, which valued issues such as culture and heritage in addition to highlighting the Portuguese legacy.

“Tourism promotion and destination marketing professionals have always been eager to tell a unique story to attract international tourists. The ‘East meets West’ marketing cliché is one of the dominant narratives deployed to fascinate tourists,” say the authors of a text published last year in England, which focuses on the cases of Macau and Hong Kong (Promoting postcolonial destinations: Paradoxical relations between decolonization and “East meets West”).

“The ‘East meets West’ tourism positioning strategy has been used to market both Hong Kong and Macau in their colonial and postcolonial periods. The idea of ‘East meets West’ is both a popular tourism promotion strategy and a historical grand narrative. This section aims to present the (re)production and maintenance of ‘East and West’ heritage discourses during the decolonization process and the rationale behind tourism promotion,” states the introduction of a relevant chapter.

Author of The feasibility of rejuvenating Macau’s cultural tourism, W.I. Au, reminds us the “East meets West” logo assumed a political role at the end of the Portuguese administration, mainly due to the action of the last governor: “Macau poses an advantage of providing visitors experiences of immersing in contrasting yet compatible spaces where ‘East meets West’, which coincides with the view of Macau of its last Governor, Vasco Rocha Vieira: Macau has its own identity in terms of its heritage, its way of life, and its distinctive capacity to be a meeting point and a place of tolerance. You can find oriental and western styles side by side, together with a mixture of these styles which you cannot say is west or east, simply that it is Macau.”

The liberalization of gambling, coinciding with the first years of Macau’s return to full Chinese sovereignty, caused changes in the image that was being worked on.

In a text published in 2008, McCartney explains that by the mid-2000s, Macau’s destination brand largely reflected a Las Vegas-style gaming brand image. He noted, however, that while tourism authorities in Las Vegas had successfully promoted “brand extensions” such as entertainment, Macau’s national tourism organization, the Macau Government Tourism Office (MGTO), “had been unsuccessful in this respect.”

McCartney noted that a lack of consensus between the gaming industry and the MGTO was clearly discernible, with the former promoting the SAR as the Las Vegas of the Orient, and the latter keen to play down references to gambling and instead promote Macau’s heritage and history.

According to Joey Pek U Sou and Thea Vinnicombe, both of the Institute for Tourism Studies (along with Tiffany Cheng Han Leung, The Hong Kong Polytechnic University), this means that “Macau has become renowned for its casinos and is often called the ‘Las Vegas of the Orient’. The blossoming of the gaming business contributes not only to the visitor flow but also to the visitor expenditure. The positive impact of Macau’s gaming industry is undeniable.”

Wu Mei and Zhao Ying, both from the Faculty of Social Sciences, University of Macau and authors of Symbolic Repertoires for City Branding Beyond Casinos: The Case of Macau, join in: “With the completion of international casinos such as the Venetian, Wynn, Galaxy, MGM, City of Dreams and Grand Lisboa after Macau’s handover to China at the end of 1999, the ‘cultural center’ had gradually turned the image of Macau into the ‘Las Vegas of Asia’.”

The MGTO however never gave up on conveying messages about Macau other than those associated with gambling.

This became more visible when, to reduce the dependence on the gaming sector, the Macau Government showed a desire to develop non-gaming tourism to ensure the stability of its economy and tourism development and to capitalize more on the inscription of UNESCO World Heritage Sites in 2005, according to Sou, Vinnicombe and Leung.

But the situation was far from clear in the first decade of this century, as a 2007 survey carried out in the United States (Destination image representation on the web: Content analysis of Macau travel related websites) shows: the authors examined Macau’s brand image across four categories of web sites including the travel trade, travel magazines, travel guides and travel blogs, and compared these with the official web site of the MGTO. They found that casinos and gaming dominated the travel sites, in contrast to the website of the MGTO which “painstakingly eschewed” Macau’s gaming image and instead attempted to portray the SAR as a “city with abundant cultural resources”.

In short, as the research co-led by Professor Veronica Lam, Institute for Tourism Studies, claims, “after it was returned to China in 1999, the deregulation of the gambling industry attracted foreign investors to build casinos commencing in 2002. Since then, the city has become known as ‘Las Vegas in the East’ because of the proliferation of casino resorts. However, unlike Las Vegas, the city has unique ‘East meets West’ history and culture in the forms of architecture, gastronomy, lifestyle, festival, events and Macanese culture.”

Professor Desmond Lam of the University of Macau’s Faculty of Business Administration tells Macau Business, “I do feel that ‘Monte Carlo in the East’ or ‘Las Vegas of the East’ are clearer positioning and easier to make sense of (for our potential visitors), but they make us a copy of others (other cities) and hence not distinctive. They also make us a clearly gaming-related city, which is not good in the new reality.”