How will it be afterwards?

In the New Year’s message, less than a year ago, the Chief Executive said that in 2020, Macau would experience “great development opportunities and face all kinds of challenges”.

But on the same day, China’s office at the World Health Organization announced the discovery of cases of pneumonia of unknown origin in the city of Wuhan and 24 hours later the Government of Macau began to check the temperature of those arriving at the region’s airport from that Chinese city.

It was the beginning of an unprecedented crisis. One that assumed such proportions that the Ho Iat Seng Government has had little chance of demonstrating its capacity to govern beyond being a de facto permanent crisis cabinet.

And, almost everyone says, successfully, at least that’s what can be seen from the opinion polls and widespread praise coming even from voices know for being critical of the establishment.

But what will happen once the health crisis is effectively behind us and the city still needs to cope with the economic crisis that resulted from the pandemic?

Meng U Ieong is a Macau-born Assistant Professor at the University of Macau’s Department of Government and Public Administration, is know for is independent-minded approach.

Sonny Lo Shiu Hing is probably the most accredited Hong Kong-based political scientist when it comes to Macau affairs. His views are carefully read by critics and supporters of the establishment.

José Álvares is a Portuguese lawyer based in Macau from the younger generation who has recently stood out as a current affairs commentator.

Our most sincere thanks for their contributions.

Not even Edmund Ho was so popular

Perhaps a more definitive assessment of Ho Iat Seng’s leadership style can only be drawn in the post-pandemic situation, but what we have witnessed so far comes to a great extent in contrast with his predecessor.

Nine months after taking office, Ho Iat Seng rolled out a major asset: the draft of the city’s first comprehensive urban master plan. The blueprint generated mixed views and is seen as a major test for the future development of Macau.

“We want and hope that Hengqin will become a second Macau”, underlines Ho Iat Seng, while stressing that economic diversification must be developed in the short term.

Ho Iat Seng wants to reform the public administration, and he has plenty of reasons to do so. One is to allow a more efficient management of resources.

Why change a successful formula? Macau is hailed as the best example of the ‘One Country, Two Systems’ concept.

Housing to the forefront

As the fight against the COVID-19 pandemic takes centre stage, other matters which took the back seat are likely to come to the limelight.

Future challenges around the corner

While the priority is to recover the economy, will 2021 be a year of social challenge? Recent words from the Chief Executive himself seem to anticipate this scenario. 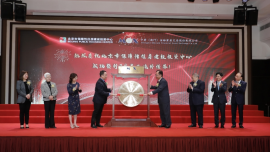 April 16, 2021
The head of Pfizer said Thursday the company's Covid vaccine, among the priciest on the...