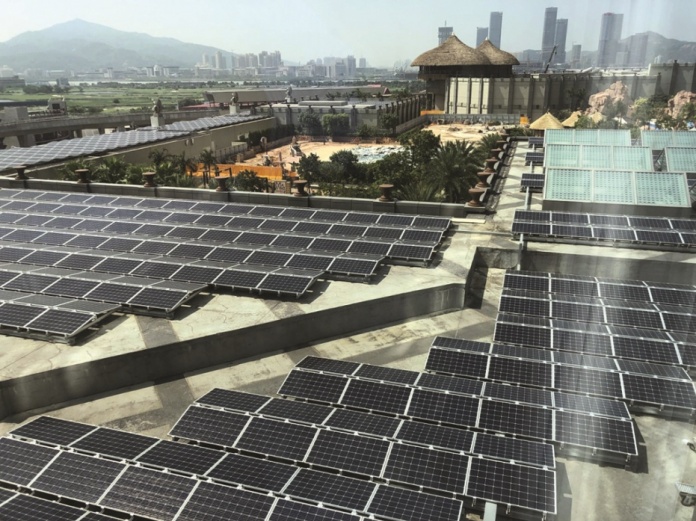 Almost all the energy consumed in Macau comes from Mainland China. There is a long way to go in terms of renewable energy despite the existing potential

In the environmental arena, there is a lengthy debate over whether Macau in fact has the right conditions to support investing in renewable energies.

“In our view, as external observers, offshore wind energy in Macau’s territorial waters makes sense, as does the development of distributed generation of photovoltaic energy. Macau has a lot of sun and many roofs. There is a potential to develop this vector in the medium-to-long term.” This is the assessment of to one of the directors of Energias de Portugal (EDP), the European country’s dominant power utility and a renewable energy leader where China Three Gorges holds a controlling share,

The UN’s Assistant Secretary General for Economic Development and Chief Economist Helliott Harris adds, “The Government of Macau must have a clear commitment to renewable energy and abandon the old style of fossil energy which has no place in the future of energy.” He went on to advice, in a statement given in Macau, that “if policies are well targeted, investment [in renewable energy] will start to flow and accelerate.”

However, in the view of Macau-based scholar Wai Ming To, interviewed later in this special report, “Macau is a small city and has many high-rise buildings. Thus, solar energy is not efficient due to the shadowing effect of adjacent buildings and the small ratio of rooftop area to total floor area. Additionally, Macau does not have an onshore/offshore wind farm that can produce a steady supply of electricity.”

The truth is that in 2020, 90 per cent of the total electricity consumed in Macau was purchased from abroad, while locally produced electricity represented only 7 per cent. But Macau’s slice is made up of electricity produced from natural gas (4 per cent), itself also imported, and from other fuels (3 per cent). Only the remaining 3 per cent of electricity was produced through solid waste incineration. “In fact,” say a team of researchers led by Qingbin Song, Macau Environmental Research Institute, Macau University of Science and Technology, “because so much electricity is imported from mainland China, local electricity production has actually decreased, from 2,010 million kWh in 2005 to 911 million kWh in 2015.”

In a research on how to turn Macau green, the academic add  that“Increasing the proportion of renewable energy is critical for creating a sustainable, energy-efficient city. Renewable energy development, in fact, is considered the key to solving the energy and environmental crises.”

Song and colleagues have no doubts: “Macau has some of the richest solar resources in the world” (with average annual sunlight time exceeding 1000 h, providing about 5000 MJ/m2). “Clearly, Macau has a tremendous potential for developing solar energy, especially a grid-connected photovoltaic system. Its small and densely populated area, however, makes it unsuitable for large-scale solar-power plants, and Macau has therefore chosen roof-top solar technology as the most effective way to utilize solar energy.” (A one-square-meter solar panel can generate about 167 kWh per year in Macau.)

Another team of scientists (from the United States and China), who published a study in 2016 on the transformation of Macau into a low-carbon city, reached the same conclusions regarding solar energy.

They went even further, adding that “to move in the direction of a ‘zero carbon emission’ community, other types of renewable energy (such as wind energy, water-source heat pumps and ground-source heat pumps) should be considered.”

The various academics recommend that the government create incentive mechanisms.

The Government “responded” with the publication of the Regulation on Safety and Installation of Photovoltaic Solar Energy Interconnections, which has been in force since 2015. The Government’s policy includes incentives, based on the price of energy generated by the photovoltaic interconnection, and the contract for the purchase of that photovoltaic energy, “to encourage the installation of the respective systems and gradually broaden the scope of the use of green energy.”

As of the end of June, according to the Environmental Protection Bureau (DSPA, the acronym in Portuguese) there are only five cases of photovoltaic interconnections with sale of electricity having been completed. The Bureau received about 20 consultations, which were forwarded for analysis.

Simultaneously, “with a view to taking the lead,” the Government successfully completed the installation of photovoltaic solar systems at the Housing Bureau, the Institute for Tourism Studies, the Printing Bureau and the Hou Kong Fa Un Building.

“In the future, the system will also be installed in public facilities with the appropriate conditions, namely via the installation plan for photovoltaic solar systems in the Ecological Zones, with the goal of transforming them into ‘zero-carbon zones’,” according to the DPSA.

The official measures to encourage the purchase of electric vehicles establish that they are exempt from paying vehicle and circulation taxes as long as they are purchased in Macau. These tax benefits come on top of free vehicle charging.

Whether because the tax breaks are not sufficiently publicized or because there is a lack of environmental awareness in the community at large, uptake has been slow. Disincentivising factors include a criticised lack of charging points in the city.

In terms of buses, there has likewise been little investment.

According to official data only 7 per cent of buses run on environmentally friendly energy. Last year, for example, saw eight more green vehicles increase the total to 79 – in a fleet of 1,000.

Interestingly, the casino concessionaires’ shuttle buses are increasingly electric or powered, at least in part, by renewable energy. In 2020, this was 178 out of a total of 322 vehicles (106 on natural gas, 65 electric and 7 with range extenders), or about 55 per cent. The number of these environmentally friendly shuttle buses was up compared to 2019 (when there were 156) and 2018 (when there were just 99).