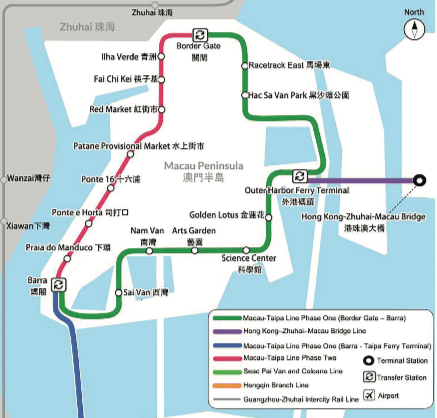 As of 2015, official documents held that “as for the Macau peninsula line, the south section was still in the design and revision phase. The consultation result for the north section was released in the middle of 2015. The coastal routing plan, among three routing plans, won the most support from the public.”

But the following year, the same official reports took a very different approach: “The government planned to prioritize the construction of the Barra Station and the Seac Pai Van Line, while the actual route of the Macau Peninsula Line needs to be followed up on afterwards.”

This was the moment Chui Sai On’s Government decided to put plans to take the LRT to the Peninsula back in the drawer, opting instead for the two connections currently agreed upon: to Barra in the west, and along the eastern edge, underground, to the Border Gate.

A year ago, the Secretary for Transport and Public Works, Raimundo do Rosário, admitted that the construction of an LRT line through the Macau Peninsula was not in the Government’s plans in the “short term” and noted that the priorities for the next 20 years are well defined in the Macau Master Plan project (see the related story in this special report).

The explanation given by Mr Rosário is generic (“I think it is very difficult to build the LRT within Macau”), but it ultimately addresses the most sensitive topic: many of Macau’s streets lack the conditions for viaducts, and underground construction would cause so many problems for the population that no one dares take the decision.

Along the way came several layouts, several proposals that in various ways intended to run a loop through the periphery of the Peninsula.

Interestingly, when Hong Kong’s MTR company presented its first study in 2003, the Peninsula was not part of the plan. At the time, this proposal was the target of much criticism, and Secretary Ao Man Long decided to suspend it.

A second MTR study “corrected” the first, suggesting, in addition to Taipa and Cotai, a line on the Peninsula (a peripheral loop).

“So far Macau has been the region with the highest vehicle-density. The streets in Macau are very narrow, while the roads available are very few, which leads to serious congestion, and many traffic accidents,” wrote a team of researchers led by Huajun Tang, Faculty of Management and Administration, Macau University of Science and Technology.

So, is it possible to solve this and other Peninsula problems without the LRT?

Ziwei Huang, a researcher from the City University of Macau’s School of Innovation and Design, tells Macau Business, “What we need to discuss are the main manifestations of the traffic problem on the Macau Peninsula. In my opinion, traffic problems on the Macau Peninsula take two primary forms. One is the intertwining of the relationship between people and vehicles and the conflicts between pedestrian and vehicle activities that threaten the safety of pedestrians. The second is the improper behaviour of motorcycles and motor vehicles in the vehicle lane (such as illegal parking, occupying the road, etc.), which seriously affects the travel experience of pedestrians.

“The combination of the travel habits of Macau residents, the spatial dimensions of the Macau Peninsula and the coverage of bus stops leads to about 75 per cent of local residents believing that buses are convenient, fast and low-cost, making them the first choice for travel,” Huang points out in his thesis.

“Implementation of the LRT system on the Peninsula is in fact not sought after by residents. Therefore, I think the LRT does not occupy a dominant position in the ‘public traffic priority’ strategy,” he adds.

“On the contrary, to solve the core of the peninsula’s traffic problem with the ‘public traffic priority’ strategy it is necessary to take a ‘people-oriented’ idea as the starting point for optimizing the environment for pedestrian activity within the public transportation system (bus) and slow travel system,” Dr Huang tells Macau Business.

Ziwei Huang’s research leads him to conclude, “I think the planning of the LRT from Barra to the Border Gate will be shelved for a long time, even stopped.”

The reasons: the spatial dimensions at street level would require an elevated track. “Due to the characteristics of the streets on the Macau Peninsula (especially in the Inner Harbour area), there is currently no extra space for the construction of light rail tracks. On the other hand, if the light rail were built as an elevated line, it would greatly affect the amount of light reaching the buildings along the street and the street interface, and there would be a certain negative impact on the visual landscape.”

Huang, who recently authored a paper titled Public Transport Priority Policy in the Macau Peninsula, believes “the bus route system from Barra to the Border has been configured as a network, and residents do not need the LRT system as a travel option. From a cost perspective, in the absence of construction results, the LRT has invested about 50 billion into the project budget, and the public may have lost confidence in the project.”