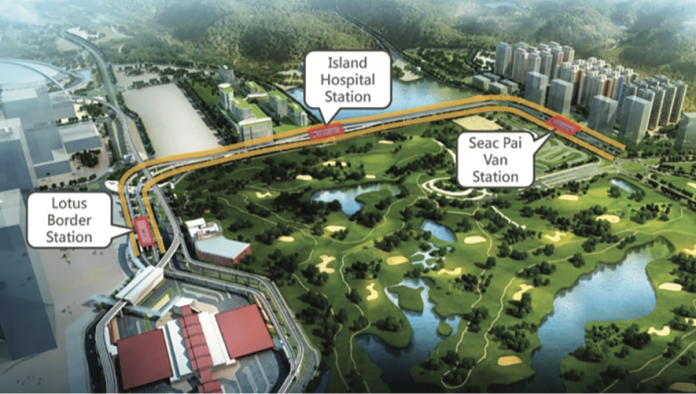 For the first time since becoming Secretary for Public Works and Transport, Raimundo do Rosário was forced to suspend a public tender to build the LRT

Secretary Rosário has promised that the delays and budget overruns afflicting the Taipa Line would not recur, at least not during the term of this government.

While each of the four lines he now has in hand will therefore be a challenge, the smallest of them is the one causing the biggest headaches.

Though the line that will connect the Flor de Lótus Checkpoint Station (an interchange with both the Taipa Line and the future extension to Hengqin) to the housing complex at Seac Pai Van will comprise just two stations (Island Hospital Station and Seac Pai Van Station) and run just 1.6 km, it is already marked by controversy.

The project was designed to start at the end of 2020, but the Infrastructure Development Office (GDI, the acronym in Portuguese) turned down bids from 10 construction companies as “obviously lower and shorter than reasonable levels.”

Last June, the GDI opened a second tender and received 11 new bids, with quotations ranging from MOP908 million to 1.008 billion.

The Government announced that construction is due to start in the second half of this year and may take two years – according to the deadlines proposed by the 11 competitors.

If all goes well, including the testing phase, the LRT could reach Seac Pai Van during the first half of 2024.

“In the almost seven years I’ve been in this job this was the only time that a public tender was cancelled and repeated. We should be allowed some mistakes once in a while. The tender is ongoing, so we will only comment on it when we finish it and sign the contract,” Rosário said last July.

But this postponement wasn’t the only controversial moment in the history of an LRT line that doesn’t seem to suit everyone.

Urban planner Lam Iek Chit recently suggested that the government should re-evaluate the line’s design or even suspend its construction.

As cited by the Shimin Daily, a Chinese-language newspaper, the former member of the Macau Urban Planning Council argued it would be more important for the Government to focus on the connection to Barra or give priority to the East Line.

Lam Iek Chit specifically criticized the design of the Seac Pai Van line, pointing out the extended journey time from the Lotus Checkpoint: how can the work cost hundreds of millions of patacas when transport will be slower than the existing bus?

[Lam has been one of the most critical voices regarding the Government’s decisions, having made several interventions in this area in recent years]

Interventions like Lam’s have led the GDI to issue some public clarifications.

As such, the Macau SAR Government felt the need to emphasise the fact that “the public housing complex of Seac Pai Van and the surrounding large housing complexes, as well as the future Islands Medical Complex, already form a new community zone, and the flow of people in this area has been increasing gradually.”

Adding that, “taking into account the perspective of community development, namely the transit of residents from this area to Taipa or Macau, as well as the transit of residents from Taipa to the future Island Medical Complex, the extension of the LRT service to Seac Pai Van will provide citizens with yet another more environmentally friendly means of transport and meet different travel needs between Macau, Taipa and the aforementioned area.”

Lam’s argument of a slower LRT journey between the Lotus Checkpoint and Seac Pai Van – due in part to the inconvenient walking distance to the line’s stations from the services and community centre, when compared with the alternative available bus stops – was also met with a response.

According to the GDI, when siting the two planned stations “and, taking as a reference the experiences of railway transport system projects in different cities, the choice of site for the stations was weighted based on passenger walking times of between 5 and 10 minutes (within a service area of 500 meters), so the location of the stations of the Seac Pai Van Line was also chosen according to the aforementioned general criteria.”

Special Report | LRT, the unloved – Previous: The future :Coloane and the ring?