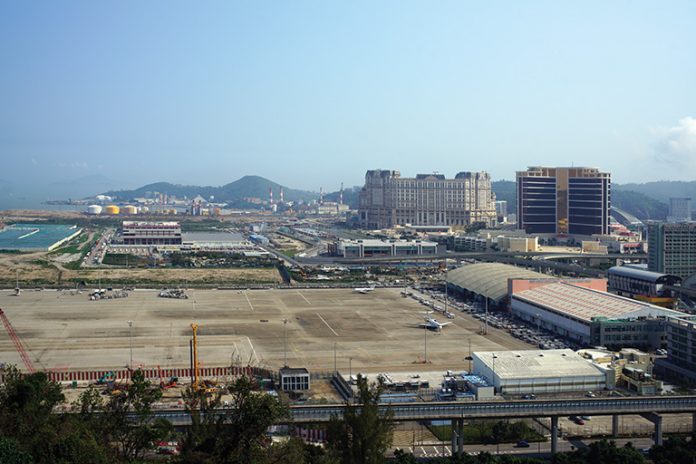 With MIA having already reached passenger capacity, the airport is now working on different fronts to expand it.

The profound changes planned for the Macau International Airport (MIA) will change the appearance of this infrastructure inaugurated in 1995.

According to the “Urban Master Plan of Macau Special Administrative Region (2020-2040)” announced earlier, the projects for a southern extension of the airport terminal, the MIA Terminal 2 at Taipa Ferry Terminal, and the “Macau International Airport Master Plan” “will optimize the connection between the airport, ferry terminal, light rail, and other road transportation, which will create an important sea-air transportation hub that will turn MIA into an ‘International Gateway’ in the following years,” CAM (Sociedade do Aeroporto Internacional de Macau S.A.R.L. / Macau International Airport Company Limited), the public concessionaire of MIA, stated to Macau Business. “The characteristics of the ‘Airport in the City’ will be well outlined,” adds the company.

The modified Taipa Ferry Terminal will be seamlessly connected to the MIA and it is expected to handle 1.5-2 million passengers annually, with 12 to 16 check-in counters and 4 boarding gates. The helipad will also be in this area.

According to the latest forecasts, the new Terminal 2 will be fully operational by the end of 2021 and will cost MOP 8.98 million, including the helipad.

Talking to Macau Business, MGTO underlined some figures: last year, the airport counted 32 airlines and 55 destinations, linking the city to the Mainland and other destinations in the region. By the end of last year, the airport exceeded 9.6 million passengers, compared to 2.6 million in 1999 (the infrastructure was designed for about 7.8 million). “The MIA has been developing its role as a major gateway of Macau, steadily expanding the number of airlines and its network of destinations,” adds MGTO.

“One important future development will see MIA directly linked with the new Hengqin (Railway) Station via the LRT,” comments Professor Brian King. “MIA will become a prospective gateway to a growing resident population in Hengqin Island (300,000 projected) with its substantial hotel capacity (100,000 rooms projected), and major sightseeing and theme park attractions,” according to this Associate Dean at the School of Hotel and Tourism Management, The Hong Kong Polytechnic University. “Airlines will be more receptive to boosting MIA capacity as Hengqin grows. Though visitation will also expand within Macau (e.g. Lisboa Palace), the larger scale developments will occur in Hengqin.”

Deputy Si Ka Lon also believes that the planned changes could change the current profile of the airport.

Among them, he highlights the “Macau International Airport Master Plan” formulated by the government many years ago. “The government is expected to carry out relevant reclamation work as soon as possible.”

The lawmaker also emphasised “the fully open concession after the renewal for three years,” waiting for “new airlines [to] open up new routes and introduce the size of their fleet within a reasonable time.” Si Ka Lon also highlights the “fulfillment of Macau’s superior geographical location and the use of the fifth freedom [Note: the right for an airline to fly between two foreign countries during flights when the flight originates or ends in one’s own country] to transfer Chinese passengers via Macau to various cities in Southeast Asia, making multiple stops in one journey, and turning MIA into another aviation hub besides Hong Kong Airport.”

“I have to say I do not agree at all that MIA will always be secondary to other neighbouring airports. MIA, in its size, was receiving close to 10 million passengers in the year 2019. This is definitely a high throughput airport, if you consider it serves a city with less than 700 thousand residents,” explained Daniel Tang, a Macau-based aviation expert with an MPhil in aviation from the University of Southampton.

Looking at the strategic plan laid down in the “Guangdong-Hong Kong-Macau Greater Bay Area Outline Development Plan” by the Central government for Macau Airport, Mr. Tang claims that “Macau and MIA should become well positioned to create a synergy effect in the development of a world-class cluster of airports in the Greater Bay Area. I see that MIA will not be a complementary or substitute airport, rather it should pave its way for becoming the region’s key business aviation port.”

One airport with two outlets in Hengqin

When Gary Ngai worked as a consultant for the Portuguese government, before 1999, he participated in the discussion about “where an airport bridging Macau and the rest of the eastern part of the Pearl River Delta should be built.”

He remembers “long-standing debates” occurring many years before the Macau’s Special Administrative Region was established.

“I supported the idea of constructing it in Hengqin, one airport with two outlets, one for Zhuhai and the other for Macau, similar to the one built in Switzerland, with one outlet to Germany and the other to Italy. The space for such an airport in Hengqin would be much bigger than two separated airports together, at a much lower construction cost,” he tells Macau Business.

Complaining that “the runway of our airport has been too short to accommodate bigger planes, a handicap for Macau tourism and businesses,” especially now that the HKIA is paralyzed by recent social upheavals and the coronavirus, the founder and former president of the Executive Board for the Macau Association for the Promotion of Exchange between Asia-Pacific and Latin America says: “Unfortunately, it was scrapped by the conservative premier Li Peng in Beijing. My question now is: can we rebuild it now? We can use the space of the two existing airports for other purposes on each side?”