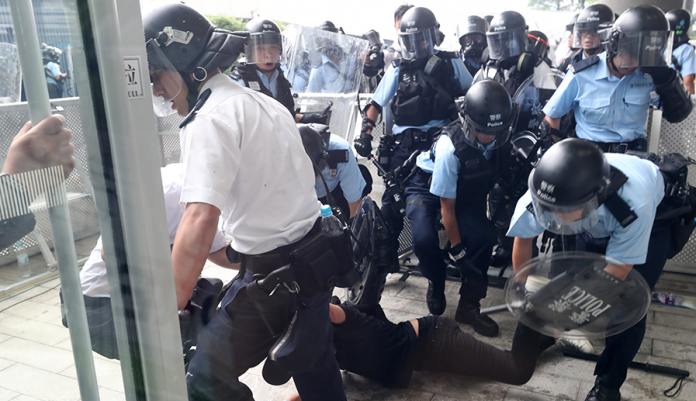 Hundreds of protesters have gathered in central areas of Hong Kong to protest against extradition law planned to be debated at the Hong Kong Legislative Council (LegCo).

Protests started on the evening of June 11 June and have extended into this Wednesday, gathering momentum and resulting in major disruption in the Central, Admiralty and Wanchai districts on Hong Kong island this morning.

Violent clashes have also broke out this afternoon as police tried to stop protesters storming the city’s parliament.

According to SVA in a note sent to MNA the extradition law will likely ‘provoke protests for at least the next week, until either its passage or withdrawal’ with Hong Kong authorities expected to show ‘no sign of abandoning the law’ despite a reading scheduled at LegCo for 11:00am having been postponed.

‘Indeed, the attempt to pass this law has injected new vigour into what was a much weakened pro-democratic movement in Hong Kong, hinting at the prospect of significant new protests in the weeks and months ahead,’ the security consultancy company said.

SVA proposed several scenarios that could pan out, namely, a series of rolling protests, ‘waxing and waning’, but focused around the government complex in Tamar, with these protests maybe becoming peaceful but with flashes of violence.

Counter-demonstrations organised by pro-government forces seeking to provoke a contest could also result in violence if they enter into direct confrontation with protesters.

There could also be government orders to the Hong Kong Police to clear the demonstration area and to regain control of the situation, ‘likely involving the wide scale use of smoke grenades or other crowd control mechanisms.

There is also the risk of a series of running, illegal protests, as tensions rise, with the situation maybe resulting in significant violence and disruption elsewhere, as in the Mong Kok riots of 2016, but maybe lasting for a longer period and extend beyond Admiralty.

Companies should then examine the safety and security of their staff; the protection of their property; possible denial of access to business premises; business disruption; offsite operations for key assets if necessary; or the cancellation of planned business events and meetings.