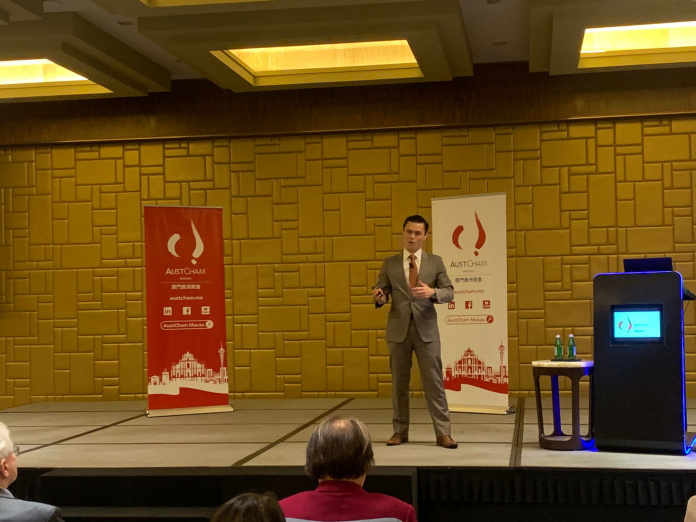 There are still opportunities for Australian wine in the Mainland Chinese market, despite the challenges arising from the anti-dumping measures and the Covid-19 pandemic, said Eddie McDougall, founder and CEO of The Flying Winemaker.

As the guest speaker at the latest session of Power Hour talk series hosted by the Australian Chamber of Commerce in Macau, Mr McDougall outlined today (Wednesday) the prospect of Australian wine in Mainland China, as well as shared his own business story.

He also acknowledged rosé has been gaining popularity in the Asian market in recent years. “China is slowly embracing that too,” he said in the “Power Hour 19: Is There Still a Place for Australian Wine in China?” session that took place at the Astor Ballroom of the St. Regis Macao.

“People are now not only drinking with their mouth but also with their eyes, and rosé in a glass just looks sexy and beautiful,” he added.

Before Mainland China imposed interim anti-dumping (AD) tariff on Australian wine in late 2020 followed by five-year AD duties starting from March 2021, Mr McDougall told the audience today Australian wine had enjoyed a strong demand in the mainland market thanks to the lower import duties arising from the China-Australia Free Trade Agreement inked in 2015.

Mainland China was the largest destination for bottled Australian wine in value terms in 2020 and the second-largest market in terms of volume, said the award-winning winemaker who was raised in both Hong Kong and Australia.

But everything has changed since the five-year AD tariffs were imposed as the bilateral relations between the two nations soured. Official figures show the sales of Australian wine to Mainland China drastically declined by 93 per cent in volume and 97 per cent in value in 2021, representing a loss of about 30 per cent — or AUS$1 billion (US$726.5 million) — in the wine export revenue of Australia.

Despite the setbacks, there is still a demand for Australian wine among the mainland Chinese consumers due to its quality, Mr McDougall reassured, pointing out, for instance, the Australian wine exports to Hong Kong have surged significantly following the AD tariffs by the mainland while there has also been an increase in smuggling activities of Australian wine from Hong Kong to the adjacent southern mainland city Shenzhen.

For instance, the Victorian government has invested in a bottling facility in the vicinity of Shanghai for winemakers in the south-eastern state in Australia to repackage their products for the sales in Mainland China, he illustrated.

Australian winemakers could also have part of their production relocated to elsewhere. Using his own business, The Flying Winemaker, as an example, Mr McDougall said his brand is still visible in Mainland China as their wine products sold in the mainland are made in New Zealand rather than Australia.

June 28, 2022
Cloaked in darkness and mystery, the creatures of the deep oceans exist in a world...