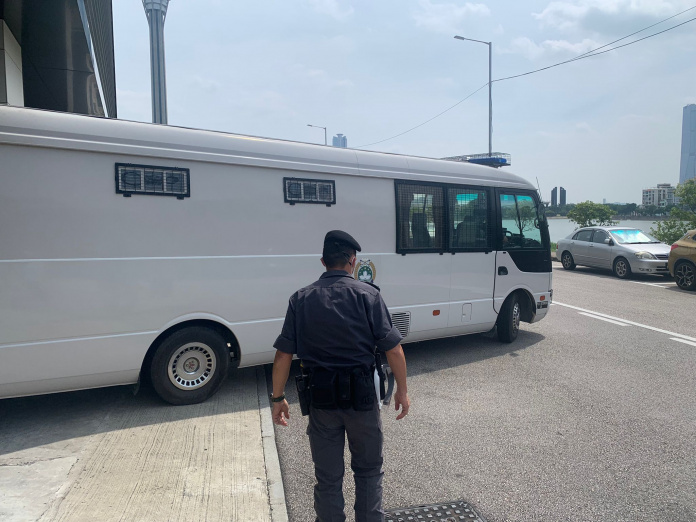 Former Macau junket boss Alvin Chau Cheok Wa broke the silence for the first time today (Monday) since his detention last November, denying he has been involved in the illicit activities of side betting for high rollers, the Court of First Instance heard.

The trial was due to start on September 2 but was later adjourned to Monday, as only 10 out of 21 defendants were present in the previous session. Although the same turnout was repeated on Monday, Lou Ieng Ha, who heads a three-judge panel in charge of this case, ruled that the trial could continue in the absence of some defendants.

The first one to take the stand to answer questions from the Public Prosecutions Office and legal counsels of other representatives in the case, Mr Chau, who dressed in a dapper-style suit, denied on Monday multiple times he was “involved in the practice of under-the-table betting” as accused by the public prosecutors.

Under-the-table betting, or also known as “side betting” or “multiplier”, usually refers to a form of gambling, in which a bet formally denominated at the casino gambling tables only represents a fraction of the amount of a private bet made between gamblers and junket operators to avoid gaming revenue levies.

Given the volume of business Suncity, which was said to be the largest junket operator in the city, enjoyed prior to the onset of the COVID-19 pandemic in early 2020, Mr Chau told the court “it was not necessary” for them to conduct side betting.

The public prosecutors also stated there were two companies handling the finance and credits of side betting made by high-rollers for Suncity, but Mr Chau denied today these two companies were linked to him.

“I’m aware there have been activities of under-the-table betting… but I have not been involved in it,” he said.

He added the operation of side betting “may be” headed and supervised by Cheong Chi Kin, who he said was not an employee of Suncity.

Mr Cheong is the fifth defendant in this case, and according to the indictment seen by MNA, he was the owner of two firms – 歐風 DEU MA (兌碼) and Karaoke GODDNESS – and was said to supervise side betting activities for the criminal syndicate headed by Mr Chau.

The prosecutors also presented several transcripts of intercepted phone calls and messages today, in which Mr Chau was said to discuss with other people including Mr Cheong about side betting.

The former junket boss denied he did so, adding he only discussed with his staff about the financial situation of the clients and whether they should approve new credits for them to gamble.

There were a total of over 40,000 messages recorded in the servers of the side-betting companies in eight years, and only “about 40 of them” involved Mr Chau, he told the court, adding this “small amount” of message proved he was not involved in the operation.

Part of the trial today also focused on the operation of online and proxy betting of Suncity, as Mr Chau and others have been indicted for running these types of illicit gambling activities in approved gaming venues. Proxy betting refers to gamblers giving instructions via telephone or other gadget to another person, known as a proxy, who helps them to place a bet on a brick-and-mortar casino.

Mr Chau testified that Suncity had not conducted proxy betting in Macau since it was banned in 2016, and the operation had then been relocated to casinos in the Philippines that the junket operator had collaborated with. “This type of gambling is legal in the Philippines,” he stated.

The business had “transferred” to a businessman named Richard Yeung, Mr Chau said, who added, however, there was not an official transaction of the operation. But he emphasised: “[Suncity] had been in operation in 28 countries around the world for 14 years and no one had ever said we had violated any criminal laws.”

He also talked about his relationship with Cheung Ling Ling — or also known as Zhang Ningning — who served on his behalf aand the junket operator to manage assets on the mainland.

The prosecutors accused these assets were repayments of debts from the mainland gamblers to the criminal syndicate headed by Mr Chau, including debts of side betting, a claim that the former junket boss also refuted today.

Ms Zhang among 35 defendants pleaded guilty in August in a separate trial about a cross-border illegal gambling syndicate linked to Mr Chau in an intermediate court in Wenzhou, a city located in the Chinese eastern Zhejiang province.

In the session today Mr Chau also shared that as the founder and a shareholder of Suncity, he had been entitled to less than 14 per cent of the profits generated by the now-defunct junket operator.

The trial is adjourned to Tuesday (tomorrow) afternoon, and it is expected Mr. Chau and other defendants will take the stand to answer questions. All the 10 defendants that were present today have stated they will testify for the trial.

Separation of criminal and civil proceedings

Five of the city’s six gaming operators — all except Melco Resorts and Entertainment — are complainants in the case, filing damage claims against some of the defendants in the case, including Mr Chau.