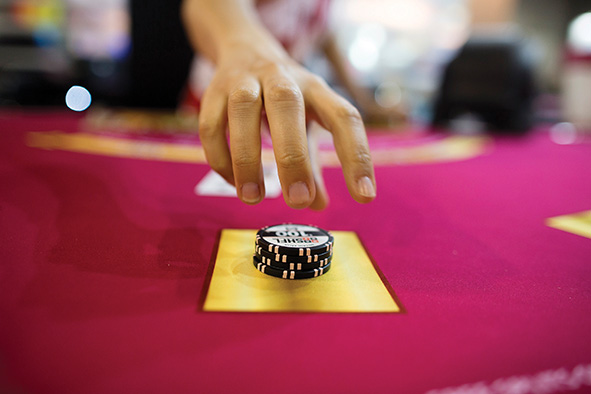 The multifunction IT system of the now-defunct Macau junket operator Suncity Group once had data about side-betting, its IT vice-president Celestino Ali told the Court of First Instance today (Wednesday).

Mr Ali and his former boss Alvin Chau Cheok Wa are among 21 people, who are charged with illicit gambling activities, involvement in a criminal syndicate, fraud, and money laundering.

Since the high-profile trial began on Monday, Mr Chau has denied his firm or he has been involved in the practice of under-the-table betting. Under-the-table betting, or also known as “side-betting” or “multiplier”, usually refers to a form of gambling, in which a bet formally denominated at the casino gambling tables only represents a fraction of the amount of a private bet made between gamblers and junket operators to avoid gaming revenue levies.

The casino mogul told the court on Monday the side-betting business “may be” run by Cheong Chi Kin, who he said was not an employee of Suncity. Mr Cheong is the fifth defendant in the case.

But Mr Ali testified today when he joined Suncity in 2013 he noticed the multifunctional IT system of the group, named “Rollex”, had data about side-betting.

He described the system — which was later renamed and upgraded as “Rollsmary” — as the “most important” system of the operator, because it recorded the data of gamblers, their chip rolling volume, hotel room bookings, and others.

The upgrade and rename of the system came as Mr Cheong complained he could not access the system, and the Suncity IT team had created a new system, “Opsman”, for Mr Cheong, Mr Ali said, adding his team also provided maintenance service for “Opsman”.

Who is Cheong Chi Kin?

The IT head described Mr Cheong as “Mr Chau’s business partner” and “a person from the operational department”.

“I had also thought he was a Suncity employee for some time… but later known he was not,” he said, referring to Mr Cheong. “He brought gamblers to Suncity but I don’t know whether he was involved in under-the-table betting.”

But he did not say explicitly whether “Rollsmary” or “Opsman” had data about side-betting.

In today’s session, he also acknowledged the staff from the cage cashier department of Suncity had once deleted some data from the company’s system before a meeting with the Macau gaming regulator, the Gaming Inspection and Coordination Bureau (DICJ). “I thought it was peculiar,” he remarked.

The cage department later asked him to have a meeting with DICJ together, a request he declined, he told the court, without specifying the nature of the meeting.

The IT head also noted he knew nothing about side-betting before joining Suncity.

Part of this high-profile trial also focuses on the proxy betting business of Suncity, as the criminal syndicate headed by Mr Chau is charged with running illicit gambling activities, such as proxy and online betting, in approved gaming venues.

Mr Chau testified on Monday and Tuesday that Suncity did not engage in online betting but only telephone betting, and the business had been relocated to the Philippines from Macau before the city banned proxy betting in 2016.

Mr Yong, a Malaysian businessman, poker player and junketeer, has not been indicted in the case.

Talking about the proxy betting business, Mr Ali confirmed today Suncity provided technical support to Mr Yong’s Universal Group (UE) before the business eventually wound up by the end of 2020.

Asked why he did so, the IT head said, “I’m afraid of breaching the national law… as Macau is part of China.”

The hearing of the trial today also shed light on the empire of this once the largest junket operator in the city. According to a transcript of WhatsApp messages dated mid-2019 presented to the court today, Mr Chau and Ellute Cheung Yat Ping, the third defendant in the case and deputy director of the market planning department of Suncity, mentioned the overseas market accounted for one-third of the revenue of the company and half of its profits.

Before the closure in December 2021 following the arrest of Mr Chau, Suncity had once been the largest junket operator in the city in terms of its revenue from its VIP rooms here, while it had also run VIP rooms in casinos in the Asia-Pacific region like the Philippines and Cambodia.

It is also heard today that a division chief of the Gaming Inspection and Coordination Bureau (DICJ) will testify as a witness in the trial next Thursday (29 Sept).