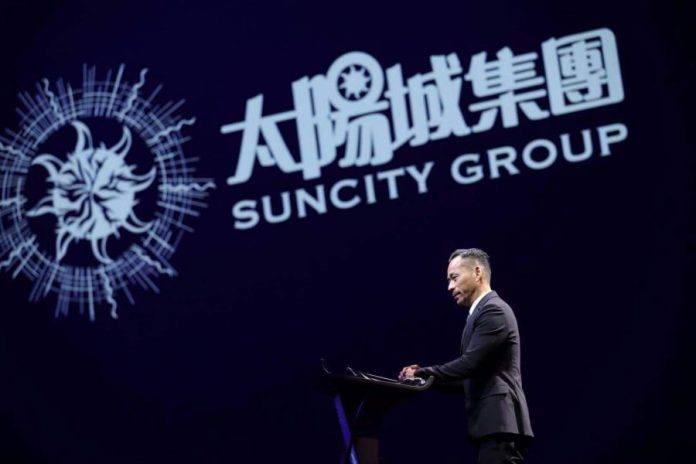 The defence of Alvin Chau Cheok Wa argued that the charges against the former junket boss were mostly based on documents without a “thorough probe”, the local court heard.

Lawyer Leong Hon Man delivered a closing statement for the boss of the now-defunct junket operator Suncity Group on Tuesday (today) in the Court of First Instance, which is wrapping up the case of the mogul and other 20 defendants that are indicted for illicit gambling activities, running a criminal syndicate, fraud, and money laundering.

At the heart of this trial, the prosecution accused the criminal syndicate headed by Mr Chau of running the so-called under-the-table betting business that caused the Macau SAR government a loss of HK$8.2 billion (US$1 billion) in gaming tax revenue between March 2013 and March 2021, as well as losses for the city’s gaming operators.

Meanwhile, five of the city’s six gaming operators asked the court on Tuesday to rule in favour of their damage claims against Mr Chau and some other defendants, as they suffered from “tremendous loss” due to this type of activities conducted by the syndicate.

In the closing statement presented in the Tuesday session, prosecutor Kuok Kin Hong said although the junket mogul had denied Suncity and he were involved in this type of betting operations, he had acknowledged he was aware of such bets taking place in Suncity’s VIP rooms in casinos.

These under-the-table betting operations under the name of “Operation Department”, “Main Camp (主太營)” and others were managed by Cheong Chi Kin, one of the 21 defendants in the case, but Mr Chau was behind all of these, the prosecutor told court. The mogul had interests in 30 out of 97 such betting operations uncovered by the police, the court was told.

Under-the-table bets, or also known as side bets or multipliers, mean a bet formally denominated at a casino gambling table representing only a fraction of the amount of a private bet made between gamblers and junkets to avoid gaming revenue levies.

No probe, no evidence

But the legal representative of Mr Chau rejected these claims, arguing the accusation of side betting was mainly based on two files seized in the server of Suncity, which allegedly recorded over 40,000 under-the-table bets undertaken by the syndicate of Mr Chau over 229 places in Macau throughout the years.

“The Judiciary Police (PJ) had not investigated whether these bets actually took place and the identity of the gamblers mentioned [in these two files],” Mr Leong said. “Out of these 229 places, only 21 places were Suncity VIP rooms.”

While the prosecution claimed Mr Chau’s syndicate profiteered over HK$21 billion from such bets between 2013 and 2021, the lawyer stressed there were no records of the cash flow of these illicit gains.

As it was alleged that the mogul was involved in 30 side betting operations, the police had never identified other shareholders of these operations, Mr Leong highlighted. “[The police and prosecution] just assumed Chau Cheok Wa was linked to these operations,” he added.

“There was no thorough investigation in this case,” the lawyer concluded. “There is no concrete evidence about Chau Cheok Wa being a shareholder [in the side betting operations], the cash flows of these activities and Chau’s illicit gains in these activities.”

The lawyer even went further to say the Macau gaming industry was so large that “it was inevitable that there were grey areas”.

“Even though there were illicit activities in the VIP rooms [of Suncity], does it mean the operator had to be held accountable?” he questioned. “Some witnesses from DICJ have testified in the court that they were not aware of illicit activities in Suncity’s VIP rooms, so it’s also difficult for Suncity, which was not a regulator, to discover these activities.”

The 40-minute closing statement of Mr Leong also spent time to detail the scale of operation and business volume of Suncity. The now-defunct junket operator had received commissions between HK$14 billion and over HK$20 billion in total a year from the city’s six gaming operators, and the rolling turnover of Suncity was “even exceeded the volume of gaming operators,” the lawyer said. The junket contributed over MOP300 billion to the Macau government in terms of gaming revenue tax throughout the years, he added.

“Suncity was the biggest player in the [junket] sector with a considerable amount of income,” he said. “It’s not reasonable and not logical to think Suncity would carry out illicit activities” for the illicit gains of just HK$21 billion in eight years.

Both Mr Leong and the prosecution were not able to finish their closing statements on Tuesday, as the presiding judge of the case, Lou Ieng Ha, restricted each party to deliver verbal remarks within 40 minutes and the remaining part of their arguments would be submitted to the court in the written format.

For instance, the prosecutor did not have time to speak on Tuesday the term of imprisonment the prosecution asked for each defendant and the latest damage claim from the Macau SAR government against Mr Chau and some others.

Five of the city’s six casino operators are also complainants in the case, claiming multimillion-dollar compensations from the syndicate of Mr Chau, as it was said in the indictment that the operators lost as much as HK$2.28 billion in gaming revenue due to under-the-table bets.

Speaking in the Tuesday session, legal counsels of the local units of Wynn Macau Ltd, MGM China Holdings, SJM Holdings Ltd, Sands China Ltd and Galaxy Entertainment Group Ltd all asked the court to award damage claims to them. Melco Resorts & Entertainment Ltd is not one of the complainants in the case.

Lawyer João Nuno Riquito, who represents MGM, said the gaming operators had “not been aware of these illicit activities” in Macau casinos until this probe.

Gaming operators are “victims of frauds and subject to tremendous loss,” the legal counsel argued.

According to the information previously released by the court, Wynn Macau Ltd is seeking damages of MOP795.2 million from Mr Chau and six other defendants in the case; HKD300.7 million for Sands China; and HK$17.2 million for SJM Holdings. MGM China asked the court to decide the amount, while there was no information in regards to the damage claim of Galaxy Entertainment.

The legal representative of Wynn, Cheang Tak Fat, also addressed the topic of how the compensations should be calculated on Tuesday. While the local criminal code says the retrospective period for damage claims could only be made within five years of the occurrence of illicit activities, the civil code details such claims could be made within three years after these illicit activities were found, he said.

The terms of the civil code should be applied in this case, allowing gaming operators to seek damages from the side betting activities between 2013 and 2021, instead of the activities in only 2017 and onwards, Mr Cheang added.

In response to the damage claims from gaming operators and the Macau government, Mr Leong, the lawyer for Mr Chau, said under-the-table bets were only conducted with gamblers. “These did not concern gaming operators, which did not incur any loss,” he added.

This high-profile case, which officially began in mid-September, is slated to be completed this week, with Judge Lou announcing a verdict in due course.