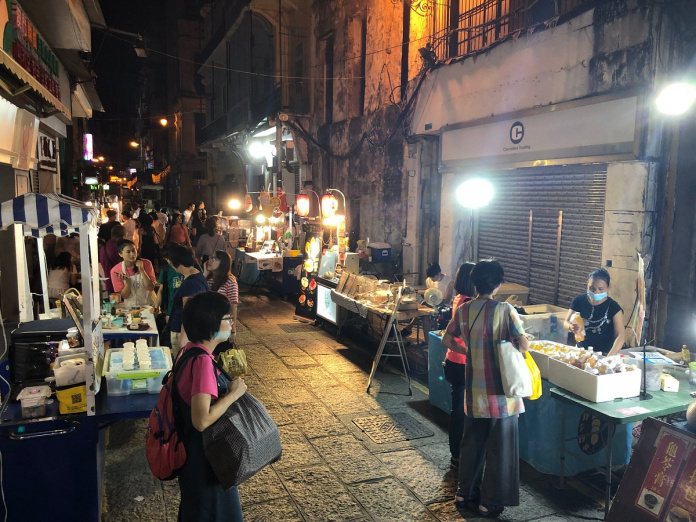 Macau’s food-focused Hong Kung Night Market offers a taste of nostalgia that can be a big factor in drawing repeat visitors to the city, according to research involving two scholars from the Macao Institute for Tourism Studies (IFTM). It suggests that perceptions that the food and atmosphere at the market are authentic can trigger nostalgic feelings among tourists, which in turn reinforce their positive attitudes regarding the local food, and bolster Macau’s image as a food and gastronomy destination, thus attracting visitors to return.

The research was based on fieldwork, including a survey answered by a sample of 399 tourists who had visited the Hong Kung Night Market in Macau’s Rua de Cinco de Outubro. They were mainly from Mainland China, Hong Kong, and Taiwan.

The results suggest that “authentic and nostalgic cues” should be made use of, so that night market organisers can attract and retain tourists, said the researchers.

The study was carried out by IFTM scholars Dr Li Xiangping and Dr Frances Kong Weng Hang, in partnership with Dr Fiona Yang Xi from the University of Macau. The findings were featured in the academic paper “Authentic food experiences bring us back to the past: an investigation of a local food night market”. It was published last year in the Journal of Travel & Tourism Marketing.

The research findings showed that visitors who formed positive attitudes regarding local food were more likely to perceive Macau as a gastronomy destination, and to revisit the city for its food. “Thus, destination management organisations need to understand what helps to shape favourable attitudes toward food,” the authors wrote.

They pinpointed two important factors in that regard: authenticity and nostalgia. However, the authors noted that, as more tourism destinations were resorting to their food heritage as a promotional tool, “the transformation of a destination into a gastronomic landscape capable of enticing and maintaining tourists” had become “increasingly challenging”.

Taking a bite of the market

The research stressed it was “necessary to maintain the authenticity” of the Hong Kung Night Market, in order to stimulate feelings of nostalgia among tourists. The authors suggested one way was “to build on the good work seen so far, by continuing to provide more traditional and tasty local Chinese delights”.

In addition to indigenous Cantonese food, the night market could incorporate additional elements of Macanese cuisine, the study suggested. Macanese cuisine is the distinctive gastronomy of Macau’s Eurasian population, i.e., those among the city’s people that have ancestral ties to Portugal or to that country’s former colonial outposts, such as Goa and Malacca, as well as to the Chinese Mainland.

“The authentic food experience could be augmented through the use of Macanese home recipes and the adoption of mixed ingredients and spices,” the researchers said. “To further enhance food authenticity, the cuisine could also be presented and served in a more traditional way,” for example, by getting the food hawkers at the market to adopt ‘Cha chaan teng’ – classic teahouse – style food presentations. Another possibility was to use “decorative packages” printed with designs featuring “Portuguese ceramic tiles” at Macanese food stands.

An additional feature discussed in the research paper was the ambience of the night market and the “critical role” it played in tourists’ food-related experiences. According to the authors, “the old street setting of the Hong Kung Night Market contributes to the sense of authenticity” encapsulated by the market.

As the scale of the current market is small, “more such night markets could be developed, but crucially, extended to adjacent old streets to create a cluster of night markets,” the researchers suggested. “This would help tourists engage in a wider range of gastronomic experiences, thus augmenting Macau’s image as a culinary destination.”

The authors also said the night market organisers could make use of non-food offerings, to satisfy the varied sensibilities of tourists. This could include hosting Cantonese artistic performances.

Cantonese opera – one of Macau’s best-loved traditional art forms – “may be one viable option that would effectively complement the old street setting,” it was suggested. “These elements jointly create an atmosphere for reminiscing; and evoke a nostalgic sentiment that further leads to favourable attitudes toward local food and the destination.”

Dr Li Xiangping is an assistant professor at the Macao Institute for Tourism Studies (IFTM). Dr Li has a PhD in hospitality and tourism management from the Virginia Polytechnic Institute and State University, in Virginia, in the United States. Her research interests include sustainable tourism development, destination marketing, and tourist behaviour.

Dr Fiona Yang Xi is an assistant professor at the University of Macau. She holds a PhD in industrial engineering and logistics management from the Hong Kong University of Science and Technology. Her academic research interests include personnel psychology, tourist behaviour, and destination branding.

Xiangping Li, Weng Hang Kong and Fiona X. Yang: “Authentic food experiences bring us back to the past: an investigation of a local food night market”, Journal of Travel & Tourism Marketing, Volume 38, Issue 3, 2021.