Klaus Schwab Founder and Executive Chairman of the World Economic Forum When financial policymakers attempt to promote economic growth, they almost invariably focus on looking for new ways to unleash capital. But, although this approach may have worked in the past, it risks giving short shrift to the role that talent plays in generating and realizing the ideas that make growth possible. Indeed, in a future of rapid technological change and widespread automation, the determining factor  or crippling limit  to innovation, competiveness, and growth is less likely to be the availability of capital than the existence of a skilled workforce. Geopolitical, demographic, and economic forces are relentlessly reshaping labour markets. Technology, in particular, is changing the nature of work itself, rendering entire sectors and occupations obsolete, while creating completely new industries and job categories. By some estimates, almost half of todays professions could be automatable by 2025. Speculation about what will replace them ranges from predictions of unexpected opportunities to forecasts of large-scale unemployment as machines displace most human labour. The first signs of this disruption are already visible. Global unemployment has topped 212 million, according to the International Labour Organization, and another 42 million new jobs will need to be created each year if the world economy is to provide employment to the growing number of new entrants into the labour market. Meanwhile, last year, 36% of employers worldwide reported facing difficulties in finding talent, the highest percentage in seven years. Addressing this mismatch in supply and demand will require governments, business leaders, educational institutions, and individuals to overcome incentives to focus on the short term and begin to plan for a future in which change is the only constant. All must rethink what it means to learn, the nature of work, and the roles and responsibilities of various stakeholders in ensuring that workers around the world are able to fulfil their potential. Human-resource executives at some of the worlds largest companies anticipate profound disruptions from the increased adoption of mobile Internet and cloud technology, the use of big data, flexible work arrangements, 3-D printing, advanced materials, and new energy supplies, according to early results from a survey by the World Economic Forum. Their view of the overall impact on employment levels in their industries was for the most part positive  provided that new workforce skills can be developed rapidly in their own sectors and in the labour market more broadly. As technology increasingly takes over knowledge-based work, the cognitive skills that are central to todays education systems will remain important; but behavioural and non-cognitive skills necessary for collaboration, innovation, and problem solving will become essential as well. Todays schools and universities, which are dominated by approaches to learning that are fundamentally individualistic and competitive in nature, must be redesigned to focus on learning to learn and acquiring the skills needed to collaborate with others. Uniquely human skills, like being able to work in teams, manage relationships, and understand cultural sensitivities will become vital for businesses across all sectors and must become a core component of future generations education. Moreover, with education increasingly becoming a lifelong pursuit, businesses must rethink their role in providing for a competitive workforce. Some companies have already grasped this and are investing in their employees continuous learning, re-skilling, and up-skilling. Yet most employers still expect to obtain pre-trained talent from schools, universities, and other companies. Business will increasingly have to work with educators and governments to help education systems keep up with the needs of the labour market. Given rapid change in the skill sets required for many occupations, business must redirect investment to on-the-job training and lifelong learning, particularly as millennials enter the workforce, seeking purpose and diversity of experience where their predecessors sought remuneration and stability. Business cycles naturally entail peaks and troughs in employment, and socially responsible businesses should follow successful examples like Coca-Cola, Alcoa, Saudi Aramco, Africa Rainbow Minerals, and Google in working toward mitigating joblessness and enhancing peoples abilities to earn a livelihood. Governments, too, have a role to play in creating an environment in which their citizens can reach their potential. Policymakers must use stronger metrics to assess human capital and re-examine investment in education, curriculum design, hiring and firing practices, womens integration into the workforce, retirement policies, immigration legislation, and welfare policies. Regulatory support for entrepreneurship and small and medium-size enterprises remains one of the most underused means of unleashing creativity, enhancing growth, and generating employment. Protecting workers and consumers is critical, but shielding specific industries from the impact of new business models will not hold off the next wave of transformation. Rather than seeking to rein in disruptive businesses such as Airbnb and Uber, governments should introduce regulations that enable their sustained growth, while looking for ways to leverage their technologies and entrepreneurial approaches to boost social welfare. Such policies include online education courses for the unemployed, digital workers insurance, virtual unionization, and tax policies geared for the sharing economy. Unlocking the worlds latent talent, and thus its full capacity for growth, requires us to look beyond business cycles and quarterly reports. The future is full of potential, but only if we are smart enough  and courageous enough  to grasp it. Project Syndicate 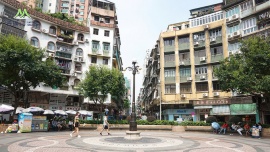