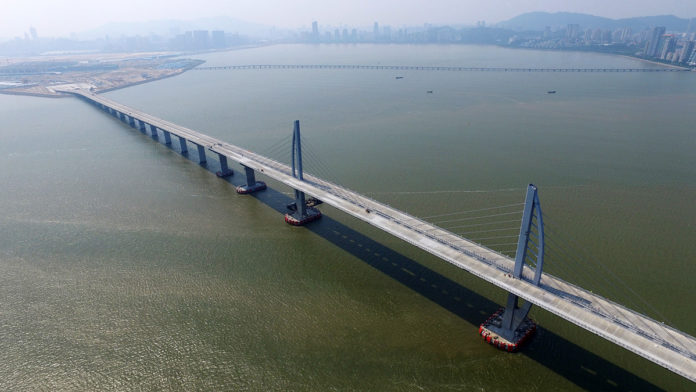 Independent analysis of the numbers shows that the impact of the bridge on the local economy was negligible or even nil. Surprisingly, there even seems to be a downside to the behaviour of the Chinese tourists crossing the bridge.

The team of researchers from the Institute for Tourism Studies (IFT), led by Professor Don Dioko, at the request of Macau Business, made an independent analysis of the figures for these first months of HZMB. And the conclusions are at least surprising:

First, it seems that the number of visitors arriving via the bridge are those that have shifted from the ferry.

Second, despite an anticipated shifting in the mode of arrival to Macau, whether or not there has been any relevant impact on the economy can be tested via trends in per capita (and overall) visitor spending. “Our research analysts drilled down further data from DSEC and it seems that per capita visitor spending has declined since the bridge opening, notably among visitors from Mainland China.”

(Caveat from the researchers: “The table above is not a definitive observation that link the bridge has ‘decreased’ per capita visitor spending. There could be other factors such as the weakening RMB and the effects of the China-US trade dispute.”)

Third, they tested one more possibility: that the opening of the HZMB bridge may have decreased the per capita spending due to the decreasing length of visitors’ stay.

“So, it appears that the opening of the HZMB may have shifted existing visitors’ mode of arrival in Macau. But convenience may have some drawbacks as it decreases the length of stay (by a tenth of a day’s length) and thus the per capita visitor spending, especially among those who tend to circulate mostly between Hong Kong and Macau, which would include same day or overnight visitors,” also states Don Dioko to Macau Business.

“There is a bit of irony, as the new bridge has recently been designated as one of the new tourist attractions of Macau. If so, then there is much work to be done, by way of creating guided tours or a visitor center (especially in the more photogenic aspects and areas of the bridge), so that it would attract new visitors as well as longer staying visitors,” says Professor Dioko.

Last May our sister news outlet, Macau News Agency (MNA), reported that visitors to Macau arriving through the HZMB spent on average 32 per cent more than visitors from sea ports.

The source of this ‘discovery’ is CSG Research. According to the same report, 78 per cent of these visitors are now repeat visitors with the intent to stay longer, compared to only 32 per cent of the people travelling through sea ports.

Derek Yu, the research director of CSG noted that although “the HZMB is yet to function at full capacity due to current limits placed on passenger traffic,” official data has shown that visitor numbers with the bridge were up 21 per cent year-on-year.
“From our study, it is estimated that the potential contribution from the bridge to Macau’s economy is MOP16.4 million per day,” added Mr. Yu.

February 24, 2020
When mentally ill patients in Macau lack the capacity to make healthcare decisions, and their...

February 24, 2020
Guangdong province, which borders Macau, today lowered the alert level for the spread of the...