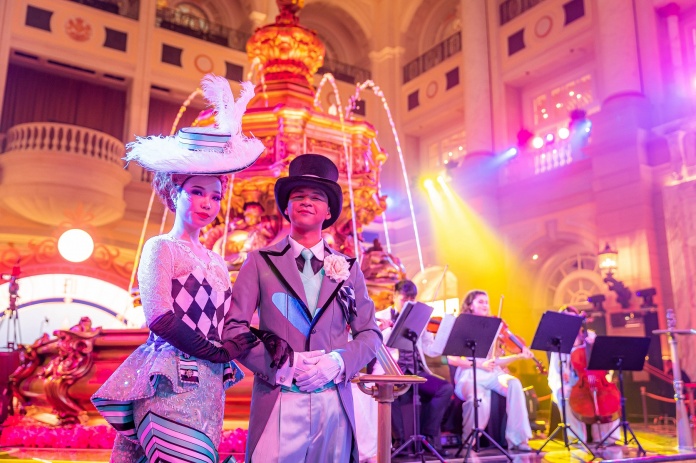 A recorded message from Beckham himself was broadcast today, with the Sands brand ambassador initially scheduled to attend the opening before the pandemic outbreak.

The property’s facade mirrors the Houses of Parliament, with a 96 metre tall Big Ben a new 6,000-seat arena to be revealed later.

In terms of new dining options, the property’s Churchill’s Table is already open all-day restaurant can accommodate 200 guests for casual dining with international and English breakfast offerings along with Asian food stations.

The event was held at the property’s Crystal Palace, designed in classic Victorian style, the glass and iron atrium features a 33-metre-high stained-glass ceiling with a full-scale Shaftesbury Memorial Fountain.

The opening ceremony today was attended by Secretary for Economy and Finance, lei Wai Nong, former Chief executive Edmund Ho Hau Wah, representatives from the Central People’s Government Liaison Office in the Macau and the new Director of Macau’s Gaming of Inspection and Coordination Bureau (DICJ), Adriano Ho, in one of its first public appearances.

The 65-member Macau Youth Orchestra performed as did the Sands China Choir, who sang an acapella rendition of one of the most recognisable British tunes of the last century, Queen’s operatic rock hit Bohemian Rhapsody.

A video tribute in honour of company founder Sheldon G. Adelson, who passed away last month was also broadcast during the ceremony.