Portuguese as official language is “a misunderstanding” and “pedantic”, defends IPM professor

A professor at the Macau Polytechnic Institute argues for the need to create a Law on the Official Language of the MSAR to dispel doubts about the primacy of Chinese over Portuguese in Macau.

Already, after Macau was chosen to host the Forum for Cooperation with the Countries and Portuguese Official Language (Forum), there were still those who argued at the Macau Polytechnic Institute that bilingualism must not exist.

This and other ideas were defended by Professor Xu Chang in an article published in the Academic Journal of ‘One Country, Two Systems’ (2013).

“A Study on the Question of Portuguese Being an Official Language” recovers a discussion that comes from the time of drafting of the Basic Law and has to do with the fact that the Chinese and Portuguese versions do not concur exactly on this point.

“In addition to the Chinese language, Portuguese may also be used as an official language by the executive authorities, legislature and judiciary of the Macau Special Administrative Region” (article 9), says the Chinese version.

According to Professor Xu, in the Basic Law “official language is defined as the language that ‘may also be used’, which is different from ‘should be used’. Such distinction apparently is meant to show the difference in the status of Chinese and Portuguese languages, emphatically eliminating any room for the existence of ‘bilingualism of Chinese and Portuguese as both officially mandated languages’.”

From here the researcher of the One Country, Two Systems Center understands that “many who have only read the Portuguese text claimed that this confirmed the status of Portuguese as an officially mandated language in the Macau SAR. This was largely a misunderstanding.”

Xu Chang explains that his judgment “is supported not only by the logic in our foregoing analysis, but a relevant decision by the Standing Committee of the NPC, which states ‘in case there is any discrepancy in the meaning of wording between the Portuguese text and the Chinese text, the Chinese text shall prevail’.”

Xu Chang defends the needs “to further affirm the status of Chinese as the primary official language of the Macau SAR and improve rules for its application,” even though this, the author recognizes, “requires calls for a mindset change.”

“The idea that all official languages are equal in status and legal effect, without distinction between the primary and secondary, is pedantic thinking and a misunderstanding,” Xu Chang insists.

And for the avoidance of doubt, one more argument: “establishment and improvement of an official language regime that suits the nature of government and social reality of the Macau SAR should proceed from the above conditions, rather than taking things for granted, thinking pedantically or catering for vested interest of the few. This should also serve as a guiding principle, barring which the language regime would fail to gain public support.”

In May 2012, the Director of Public Administration and Civil Service Bureau issued a circular entitled “Atenção com a divulgação de informações ao público (Attention in Release of Information to the Public)”. It declared that, in accordance with Article 9 of the Basic Law and Decree No. 101/99/M, “both Chinese and Portuguese as official languages are to be used by government departments when releasing information to the public.”

“This measure again gave rise to a prolonged debate over the question of how to ensure ‘Portuguese being also used an official language’ in the Macau SAR,” points out Xu Chang, to whom, “If Portuguese were to be elevated to the same legal status as that of Chinese, all government affairs would have to be conducted bilingually.”

According to this researcher, not only “will there not be adequate resources to support this, as apparently the majority of employees within the Macau government do not possess bilingual proficiency,” as “this would entail tremendous waste of translation resources, hamper efficiency of public administration and increase government expenditure.”

“Third, it is also unnecessary. In a predominantly Chinese society sharing the same language, adding an extra layer of Portuguese translation is akin to adding legs to a snake,” he states.

That’s why he defends in this paper “the start of legislative procedure for a ‘Law on the Official Language of the Macau SAR’.”

“Conservatism, status quo and a fear to move forward should be discarded. The work to complete this legislation should be based on legality, scientific thinking and democratic principle to win support of, and implementation by, the majority of Macau residents,” the researcher also argues.

Xu Chang is frankly against the idea of bilingualism in Macau. “The tendency to adopt bilingualism across the board without distinction between general and specific administrative actions should be avoided,” IPM’s Professor adds.

To support this idea, the author calls this fact: “the categorical decisions by the Standing Committee of the NPC, and by the Macau SAR Preparatory Committee under its authorization, to take legal steps to abolish related provisions for ‘bilingualism’.”

Both “were a clear indication that the organ of state power determined the provisions for ‘bilingualism’ in these decrees were in contravention of Article 9 of the Macau Basic Law. Such a definitive conclusion should prompt serious attention to situations of similar nature.”

And even though the Basic Law recognizes Portuguese as an ‘official language’, “one is primary while the other secondary. Chinese should and must be used in public administration according to law, while Portuguese may be used in such context. In the event of discrepancies between the two, Chinese will prevail as a matter of principle, which does not exclude exceptions under specific conditions.”

That’s why the author defends the “eventual formulation of a ‘Law on the Official Language of the Macau SAR’,” a suggestion never accepted by the government, especially because the speech of Chinese Prime Minister Li Keqiang at the 5th Conference of the Forum brought new impetus to the use of Portuguese in Macau and as it drowned out the current which, led by Xu Chang, argues that there is no room for bilingualism in MSAR and whereas the two official languages must have different statutes.

(Professor Xu was unavailable to answer the questions submitted by Macau Business aimed at understanding if the researcher maintains the ideas defended in 2013 and how they fit in with the policies of China and Macau to promote Portuguese language.) 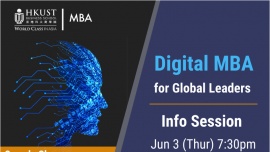 How HKUST’s Digital MBA is a game changer

May 13, 2021
The future has arrived and The Hong Kong University of Science and Technology...