The Portuguese and English Press Association (AIPIM) is conducting a survey on freedom of press in the Macau SAR. Despite the unfounded criticisms from international organizations – namely the Brussels-based International Federation of Journalists (IFJ), local journalists know that censorship, in its widest accepted terms, does not exist here. The IFJ-supported report was produced by its Hong Kong office, but they never went to the trouble of conducting a proper investigation or even contacting local representative associations. This, in itself, presents any criticisms as being based on a doubtful code of conduct and a highly censurable ethics code.
However, there are factors that contribute to a lower level of access to information by journalists. Equally, due to selective and discriminatory practices, there are decisions from official departments and autonomous entities that violate the Chief Executive’s promises to treat all the press equally, as if outdated laws that promote unequal treatment were not damaging enough factors. Discriminatory decisions, either regarding access to information or equal distribution of support that might enhance or diminish the quality of a media can impact its independence.
The current secretary for Social Affairs and Culture, while still acting as Spokesperson for the government and occupying the post of Chief of Staff to the Chief Executive, tried to shake the system, but systems are hard to change when only one man or a few men are pushing for that change. There are blocking forces in Macau that strive to impede greater transparency. Starting today, Business Daily will denounce cases and publish the internal struggles ongoing within the Macau government – the very same struggles that, in the extreme, cause certain media outlets to be discriminated against, while others enjoy privileges.
Also, this newspaper is returning to an old practice of print media, of publishing the editorial on the cover page, instead of the inside pages. Good reading. 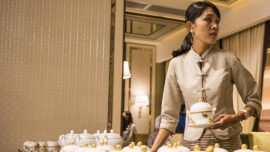