It was an adventurous and sometimes intimate Barack Obama who introduced himself to an audience that overcame the 3,200 seats to basically tell stories and give advice to the delegates of the 19th edition of the World Travel & Tourism Council (WTCC) that this Wednesday had its first of two days of sessions on the challenges facing the industry.

Serene, confident, playful and humble; everything the former President of the United States knows pleases those who hear him. And now, without the pressure of the White House’s cutting-edge policy and the venomous political corridors of Washington, elevated to another galaxy. And so, he did not disappoint, even if his presence was far from fundamental to the objectives of the event from a strictly professional point of view.

The value of Obama was in the media attention he secured, projecting the event to another dimension. If that justifies what the Spanish newspaper El Mundo claimed to have been Obama’s cachet – US$400,000 for an hour of sofa talk with the Hilton Group Chairman and WTCC Chairman – is something only the organizers will determine.

With the visit to Seville, the American Democrat ended up paying a “debt” of the past, when he cancelled a previous visit to the city, while still sitting in the Oval Office, and returned from Spain to the US after an attack that killed five policemen in Dallas.

Under the guise of travel, after all the industry for which the WTCC has the responsibility of lobbying, Obama pulled the strands of his memory and shared experiences. From when he had no money and came to this same Spain, still a boy, sleeping in hostels in Barcelona, sharing “bread and wine” and strolling along the famous Ramblas.

But he also spoke of the family, in tones of a conversation between friends; of his wife, Michelle, daughters, now with 17 and 20 years old, and how traveling and encountering cultures opens the horizons and makes the world smaller, but also more conciliatory. Because knowledge about different cultural backgrounds “leads to greater understanding” and therefore makes it easier to compromise.

A political splinter was thrown. No names, but easily detectable. Who is in the antipodes of Obama nowadays: confrontational, disrespectful, arrogant, insecure?

But traveling, says Barack Obama, makes us discover even more: “Makes us see what we have.” And what we can lose if we do not act, he warned. And thus, the theme of destabilization that is being forced on the environment arrives. And with climate change, he asserted, “comes the impact on migratory outbreaks,” because it is all interconnected. All with consequences.

Confidence is in the younger generations, although “old people do not like to lose power.” Young people “are not afraid, they are more adventurous.” There is hope.

The advice he gives to his daughters can be summed in two phrases: “be kind and be useful.” His defense of the role of women in global society and ‘Obamacare’, which extended healthcare to economically disadvantaged Americans, earned him immediate support from the audience. It was not difficult, again, to realize who his target was. Donald Trump’s name was never mentioned. It was not needed.

And what makes Obama proud? In addition to the aforementioned medical support plan, the fact that “we prevented a Great Depression.” The debased consequences of the economic crisis that erupted in 2008, which will more than certainly have a chapter or more in the book that he is working on that will portray his presidency.

In addition to that, he says, between smiles, “We had no scandals. We maintained a high level of integrity. We hired people who were there [White House] for the right reasons.” Again, the audience understood.

Among the work of his Foundation to support young people who may be tomorrow’s leaders, Barack Obama wants to see if he will discover, with time and pace, other places on this planet that were connected by the oceans exactly 500 years ago, with the first voyage of circumnavigation that left from this same city, Seville, led by a Portuguese, but to which all give a Spanish name.

“I want to go to Angkor Wat,” he says, because when he was in Cambodia, agenda issues did not allow him to go to one of the largest religious complexes in the world. But also, to the Taj Mahal in India, also scratched from the presidential agenda by another political emergency. And Patagonia.

With his mission accomplished, Obama left the room, applauded by the audience on its feet. When his caravan ran off at the speed of the Palacio Congresos, few people noticed a small group of demonstrators on the other side of the avenue, who shouted, “Seville is not for sale!” a consequence of the impact that the strong tourist development irremediably has, but that’s for another chronicle. 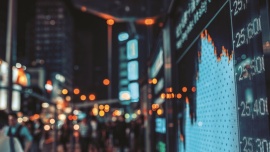 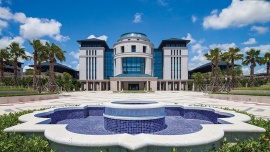 January 1, 2021
The COVID-19 pandemic changed the world. We just don't know how much yet.
Load more