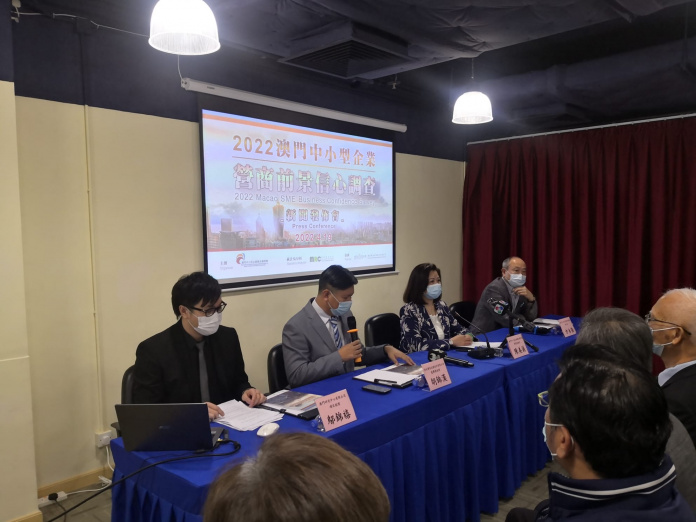 About a third of Macau SMEs have had to lay off employees or ask them to accept non-paid leave due to the unfavourable economic conditions in the SAR, a survey carried out by the Macao Research Center and organised by the Federal General Commercial Association of Macau Small and Medium Enterprises.

The survey was carried out between February 25 to March 11 of this year and covered about 500 local SMEs, most of them from the wholesale and retail sectors.

It resulted in a negative 30.0 score on the Macau SME Business Index, which according to the association represents local SMEs currently have a very negative outlook on the business environment

Among surveyed SMEs, 88 per cent reported that their business had declined due to the pandemic impact, with high rent costs and the drop in tourist numbers the main factors mentioned contributing to this decrease.

Some 31 per cent of the inquired SMEs, admitted having laid off employees or asking them to accept non-paid leave, with 10 per cent expressing they would close down. The SMEs inquired had an average of 15.5 employees.

Therefore, the report concluded that if Macau SMEs continue to face the mentioned negative factors there would be successive layoffs, non-paid leave arrangements and even business closures would happen again.

All the Tourism and Entertainment industries indicated that their business was negatively affected, and their business volumes recorded the largest drop, almost 73.8 per cent.

About 70.2 per cent of the SMEs inquired also expected that it would take one year or more to recover from the losses caused by the pandemic.

“More than 4,000 college graduates are expected to enter the local labour market every year. Faced with the shrinking gaming companies, the loose-down of SMEs and the sharp decrease in jobs how will the Macau society digest these human resources?” The association vice-president Melinda Chan Mei Yi said in a speech during the presentation of the survey results at the Macau Fisherman’s Wharf.

“For the large number of middle-class people who have had a stable income in the past how could they make a living after they are unemployed”.

Chan also underlined that most of the local university students and graduates in the city have focused on two sectors, tourism and the meetings, incentives, conferences, and exhibitions (MICE) setcor.

“If we start thinking there is a need to diversify to technology or other areas not really prominent in the city, this will suddenly make it very difficult for people to enter the job market,” Chan noted.

“Diversification will be hard because we don’t have enough people for these new focus areas. That is the difficulty in diversifying in the short term”.

The survey report recommended for the SAR government consider providing short term financial assistance for SMEs to alleviate their difficulties and devise a prospective strategy in view of the fluctuating pandemic situation and the “looming” prospects of the local economy.

A new budget amendment proposal revealed last week by the Executive Council includes MOP5.9 billion (US$730.6 million) to be handed out again in a fourth consumer e-voucher round, with MOP1.3 billion to also be provided in water and energy fee exemptions.

About 76 per cent of the survey respondents considered that short-term financial support measures proposed by the SAR government were positive, but only 30 per cent had a positive view of an increase in the amount of low-interest loans for SMEs and extensions for their repayment period.

About 25 per cent of the surveyed SMEs said they had incurred new loans to face the economic downturn.