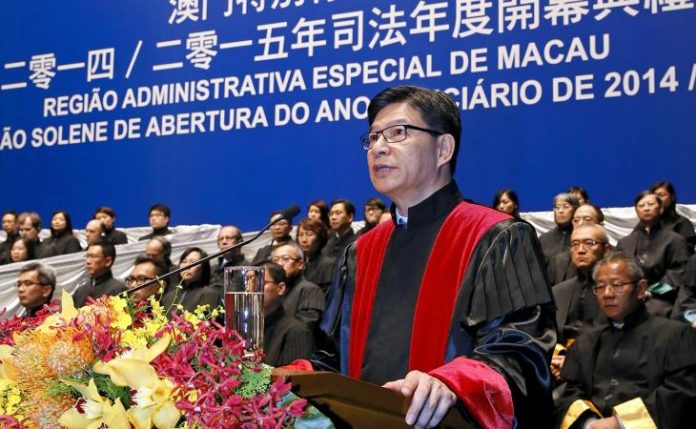 The Court of Final Appeal has rejected an appeal filed by the allegedly corrupt former Prosecutor-General Ho Chio Meng, which sought to reverse the top court’s previous order putting him in detention. Judge Viriato Lima wrote in his judgement released last week that the final court’s decision of remanding the city’s ex-top prosecutor in custody is in line with the legal precedent set for the disgraced former Secretary for Transport and Public Works Ao Man Long. “After the Court of Final Appeals heard the case of the former Secretary [as if it were] by the first-instance court, the public would not understand or it may trigger social panic if it [the court] declined to hear the case of the former Prosecutor-General who is in a similar situation [to that of the former Secretary],” the judge wrote. This means that as the Court of Final Appeal was the first court in which the case was heard, denying the Secretary the possibility to appeal to higher courts, allowing the former top prosecutor to appeal to lower courts would not adhere to the justice meted out to the former Secretary. He added that no appeal can be filed against the rulings or orders made by the city’s final court – even if it hears a case for the first instance. Final ruling “A decision made by the Court of Final Appeal is the final ruling. It does not accept any appeal against the decision,” Judge Lima stated, adding that only lawmakers had the power to add a possibility of appealing against the top court’s decisions, or to create new courts. The Judge also indicated that the former Prosecutor-General cannot be exempted from custody as his current official position does not enjoy the privileges granted by the Statue for Magistrates to magistrates. The Court of Final Appeal previously declined to entertain an application for a writ of habeas corpus filed by Ho Chio Meng at the beginning of March. The allegedly corrupt official, who was once seen as a possible candidate for the post of Chief Executive, was arrested by local anti-graft agents and detained by order of the top court at the end of February. He is accused of colluding with local businessmen of awarding some 2,000 public contracts of the Public Prosecutor’s Office by illicit means between 2004 and 2014. The Commission Against Corruption (CCAC) has said suspects in the case had illegally gained at least MOP44 million through the deals.