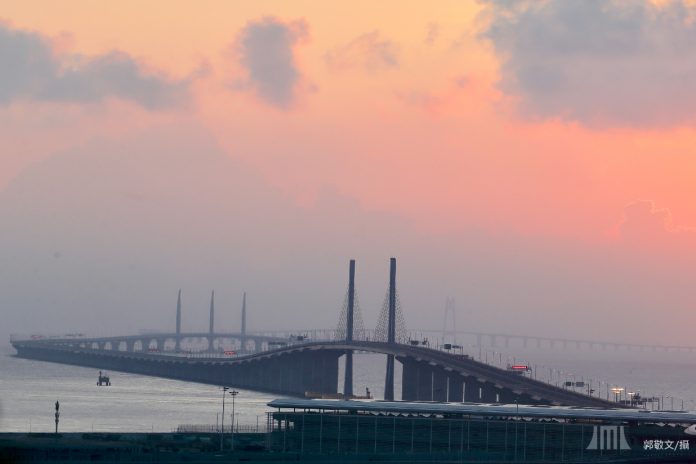 The President of the Macau Association of Consumers of Public Utility Companies, Chiang Chong Fai, told MNA that transportation capacity in Areia Preta should be taken into consideration before increasing quotas for vehicles allowed to cross the Hong Kong-Zhuhai-Macau Bridge (HZMB).

The Macau transport authority plans to increase the quotas of local light vehicles to drive between Macau and Hong Kong, but local opinions are worried that increasing the foreign vehicles allowed to enter the city might increase the pressure in the city’s transportation capacity.

The Transport Bureau (DSAT) claimed last week that it will soon allocate new regular quotas for local light vehicles to use the HZMB, although it did not provide an exact number of the increased quotas.

Currently, Macau has approved a total of 600 light vehicles to drive on the bridge, with companies and individuals holding 300 quotas each.

While MOP30,000 (US$3,712) was demanded for the first year, quota holders will now only be required to pay MOP1,000 to renew their quota for a three-year period.

However, Chiang believed that if driving quotas for Macau residents will be increased, then it was likely that Hong Kong would do the same for its local drivers, with the neighbouring SAR currently only providing 300 quotas allowing access to Macau.

Chiang underlined that the original purpose of building the bridge was to enhance communications between the three cities, thus increasing quotas is a normal development.

With the Amizade Park roundabout in Areia Preta being the only connection between the HZMB and the Macau Peninsula, nearby areas are expected to see an increase in traffic pressure.

Chiang worried that more cars entering Macau via the bridge will definitely put more pressure on the nearby transportation networks as well as the entire transport capacity in Macau, the civic association president told MNA.

“Macau’s receiving capacity in transportation is too weak. It would be a great challenge even if there is one more car in Macau,” Chiang said.

Chiang emphasised that it is a must to open the bridge for the local logistics industry, but that transport in Areia Pretaalso obstructed the feasibility of this issue.

“Cargos are much larger than buses and private cars. The road networks in Areia Preta are unable to deal with this at the moment,” Chiang noted.

According to the data of the Macau Customs, a total of 7,465 buses and 16,109 light vehicles had passed through the Macau broader at the bridge as of the second quarter of 2019, but with zero cargo transport crossing.

Since the opening of the HZMB in October 2018, the local logistics industry continued to complain that no local cargo trucks have been allowed to drive on the bridge.

Chiang hopes that the new government will consider improving the objective conditions of transport capacity, not only for the bridge but also for all transportation in Macau.