Turkmenistan on Friday opened a gas compressor station it hopes will help boost natural gas supplies to China and elsewhere.

Turkmen leader Gurbanguly Berdymukhamedov said this week during a meeting with China’s ambassador that the new pumping station could more than double volumes of gas pumped into the Central Asia-China gas pipeline.

Delegates from the local branch of the China National Petroleum Corporation looked on as the pumping station at the Malay gas field in Lebap province began operations, the Turkmen foreign ministry said in a statement.

The statement quoted Li Shuliang, general manager of CNPC’s branch in Turkmenistan, as saying that the new facility would “expand the opportunities of exporting natural gas of Turkmenistan to international markets”.

Neither Beijing nor CNPC have said they plan to immediately ramp up imports from Turkmenistan, which were more than 30 billion cubic metres (bcm) per year before a slump triggered by the coronavirus pandemic.

The new gas compressor, which can process up to 30 bcm of natural gas per year, was built by London-based Petro Gas and a company that belongs to the German group Siemens.

Pipelines carrying gas from the country to Russia and Iran are believed to transport less than 10 bcm per year combined, with Russia only renewing purchases in 2019 after a three-year hiatus.

Philippines approves Chinese jab but health workers to miss out

Mozambique: Country received US$661 mln in support in 2020 to cope with pandemic

Cabo Verde: Number of overflights down in January for first time since April 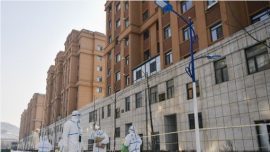 February 22, 2021
Italy's ambassador to the Democratic Republic of Congo, Luca Attanasio, was killed on Monday while...