The United Nations said Tuesday it had launched an emergency appeal to help hundreds of thousands of people in areas of Afghanistan ravaged by last week’s deadly earthquake.

The UN humanitarian agency said that it and its partners had launched an appeal for $110 million to urgently help 362,000 people for the next three months in the worst affected areas of Paktika and Khost provinces.

He said the appeal launched Monday was part of this year’s overall Humanitarian Response Plan for the impoverished and conflict-torn country.

To be fully implemented, that would require $4.4 billion, but has so far only be 34 percent funded, Laerke said.

In fact, he said, the UN programme is so underfunded that the agency and its partners have had to borrow supplies and personnel from other humanitarian programmes to assist with the immediate earthquake response.

In high-level US visit to Solomon Islands, China looms large

August 8, 2022
A high-ranking US delegation lands in the Solomon Islands Saturday, as Washington wrestles with Beijing...

August 6, 2022
The following are the latest updates on the COVID-19 global confirmed cases in hardest-hit countries... 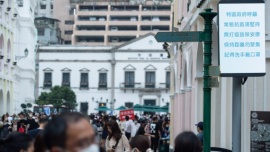 August 4, 2022
The local tourism industry is hopeful that the daily visitation to Macau can...
Load more