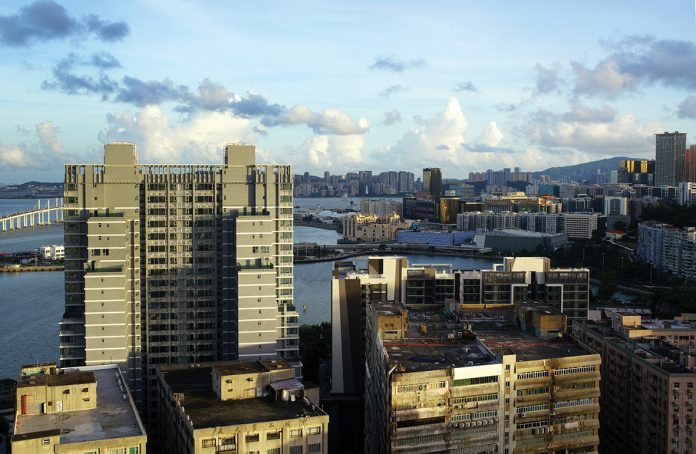 There is a mixed outlook for the local residential property market this year, over potential interest rate hikes, clampdown on gambling activities, and the uncertain COVID-19 situation, among others

Albeit the continuous fluctuations of the Covid-19 pandemic and headwinds in the gaming industry, the local residential property market has been pretty resilient, in the past two or more years, in terms of price, as other local economic indicators have plummeted. But how will this hold in the near future depends on a number of factors, including the interest rate hikes and the outlook of the gaming industry, in addition to how the pandemic situation will play out.  Some industry insiders are casting a slightly pessimistic view, while others are being cautiously optimistic.

The latest figures from the Statistic and Census Service (DSEC) show that the home price in Macau averaged MOP103,859 (US$12,982.4), a square metre in 2021, down by 1.1 per cent from 2020 and is down by just 3.4 per cent from 2019, before the start of the Coronavirus outbreak. It was also the fifth consecutive year for the local average home price to stay at the level above MOP100,000 a square metre. According to the DSEC data, the transaction volume, a total of 6,001 flats were sold last year; decreasing by 7.4 per cent year to year, reaching the lowest level since 2015, when only 5,976 home sales were transacted.

So far, the home price has been supported by stable housing demands, particularly from first time buyers, and limited to the first-hand supply. “The overall price for small-to-mid-sized flats, which are the major target of first time homebuyers, had little change last year,” says Jane Liu Zee Ka, Managing Director of Ricacorp (Macau) Properties Limited. The dominance of first time homebuyers in the residential market accounted for over 80 per cent of total home transactions, started since February 2018, when the government loosened mortgage loan ratios for first time resident buyers, aged 21 to 44 years.

“Developers have also launched various incentives for flats priced between MOP5 million and MOP6 million to entice first time buyers since the start of the pandemic.” Ms Liu illustrates, adding, “For instance, some ten flats priced in that high end range in the residential project in Nam Van, La Bahia No.1, have been sold in the past few weeks, with the developer offering free grand decoration, furniture, and appliances. The result [in La Bahia No.1 in recent weeks] has been pretty ideal in this climate,” she comments.

The situation for larger flats has been another story though. “There has been a significant decline in the price for flats in the range between MOP10 million and 20 million, or higher since the end of last year over the demise of [casino] junket operators and a new wave of Covid-19 cases in nearby regions,” Ms. Liu pinpoints.

She refers to the shakeup in the gaming segment, following the arrests of the bosses of the city’s two largest junket operators — Alvin Chau Cheok Wa of Suncity Group and Levo Chan Weng Lin of Tak Chun Group, over alleged illicit gambling activities and money laundering. These cases, signal heightened oversight from the authorities on casinos, and have prompted at least four of the city’s six gaming operators to cease cooperation with junket operators.

Lily Hong, sales director of Midland Realty (Macau) Ltd., acknowledges the asking price of some large second-hand flats, owned by people linked to the gaming segment, have plunged in recent weeks, following the arrests of the junket bosses. “But there have not been many of these cases in the market,” she adds.

Looking ahead, Ms Hong is optimistic towards the home property prospect for this year. “The performance will at least be better than last year,” she explains. “Despite the fluctuations of the pandemic situation in the past two years, we could still see a stable housing demand in Macau.”

“It is also expected the local economy could continue to improve this year as the pandemic situation stabilises and normalises. There will also be fewer uncertainties about the future of the gaming industry, the city’s major sector, with the passage of the revised gaming law,” she continues. “Thus, the home price here will likely remain stable in 2022 while the volume of transactions could rebound from the level of about 6,000 deals last year.”

The local authorities announced the long-awaited bill of amendments to the gaming law in January, which is now underway in the Legislative Assembly and could be approved by June, when the city’s six gaming licenses expire. The approval and enforcement of the revised gaming law will pave way for a new round of public tender for gaming concessions, the government has said.

Nonetheless, Jones Lang LaSalle Macau (JLL Macau) has a more gloomy view towards the residential market and the property market as a whole. The property consultancy expects a decline of 5-10 per cent in the capital value of the high-end and mass-to-medium residential segments this year, after a decline of 3.4 per cent and 0.8 per cent respectively in the high-end and mass-to-medium segments last year.

“Though setting up city master plans and increasing supply of private residential sites will help drive the long-term development of the property market, currently only 2,241 residential units are under construction or close to completion,”  Oliver Tong, general manager of JLL Macau, says. “In the short to medium term, the new supply in the private residential market will remain limited, lending support to the capital values of the mass-to-medium residential properties.”

The Policy Research and Regional Development Bureau has recently published a research report on the housing policy, which indicates that a total of 25,600 new private homes will be needed from now until 2030 and the authorities would launch land auctions ‘in a timely and gradual manner’ to enhance the  private residential supply. The impact of the planned increase in both the private and public housing supply in the city in the next five years on the private home price would “not have significant negative influences” on the quality of personal loans and the stability of the local financial system, the report added.

“However, with the uncertainties in the [pandemic] conditions, coupled with the economic downturn and interest rate hikes, the job outlook and income of the residents will be affected, resulting in a more cautious sentiment and weaker affordability for homebuyers,” Mr Tong reasons. “In fact, buyers should evaluate their affordability before making a decision to purchase a property as the market will continue to be affected by many negative factors in the short run.”

The U.S. Federal Reserve announced in late January that it was likely to hike interest rates in March with subsequent increases, but the details of the pace of hikes are not available at the moment. This initiative by the central bank is to tame down the soaring inflation in the U.S that is now hovering at the highest level in nearly four decades. Analysts have forecast the U.S. interest rate will be raised by at least 0.5 percentage points in March and there might be at most seven hikes within the next 12 months.

Given the indirect peg of the local currency — pataca — with the United States dollar via the Hong Kong dollar, local lenders might follow the moves of their counterparts in the world’s largest economy. But the Macau Association of Banks has noted there might not be significant changes in the interest rate in Macau and Hong Kong in the near future, should the accumulated interest rate hikes in the U.S. be within 2 percentage points.

In the perspective of Ms Liu of Ricacorp Macau, the impact of the interest rate hike on the residential property market might just influence the mental prospect of homebuyers if the pace of the hikes is slow and short-lived. “At the moment, it feels like the worst is behind us. But who knows?” she concludes.

The number of all types of property units transacted — including homes, shops, offices, industrial spaces, car parking spaces and others — totalled 8,802 in the city in 2021 amid the Covid-19 pandemic, reaching a new record low since 1990, when only 8,463 units were transacted.

The 2021 figure also represented a decline of 2.2 per cent from about 9,000 transactions in 2020, according to the Statistic and Census Service (DSEC).

The total value of all types of property units transacted declined 2.6 per cent year-on-year to MOP49.77 billion (US$6.22 billion) last year, which was the lowest level since MOP26.3 billion was reported in 2009 during the global financial crisis, the DSEC data said.