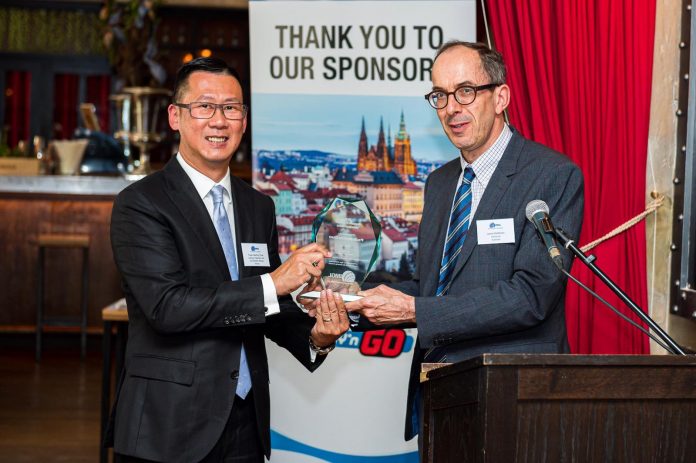 The Director of the Gaming Inspection and Co-ordination Bureau (DICJ), Paulo Martins Chan, has received the 2019 Regulator of the Year Asia/Australasia award provided by the International Masters of Gaming Law (IMGL) association.

“I am particularly honored that IMGL, a prestigious international association, has awarded me this award, and I consider it to be the fruit of a joint effort by the MSAR government,” Mr. Chan told MNA after receiving the award.

“I greatly appreciate the trust and support of Chief Executive Dr. Chui Sai On and the Secretary for Economy and Finance Lionel Leong as well as the entire DICJ team. DICJ will continue to make every effort to develop Macau’s gaming sector”.

​IMGL is a non-profit association comprising of over 340 international members involved with gaming jurisdiction and law.

Each autumn, IMGL recognizes outstanding regulators based on stringent standards, including pre-eminence in the regulatory field and their noteworthy contributions to the overall body of regulatory work; with candidates being picked from Europe, North America, South and Central America, Australasia, Indian countries, and evolving jurisdictions.

The specific criteria for the selection process include that the overall body of work as a regulator be exceptional, and that the regulator makes contributions to the gaming industry as a whole while demonstrating noteworthy achievements in the regulation of the industry.

The nominee must also provide a stable regulatory environment in the jurisdiction, be identified as a person of high integrity, and demonstrate service to the community.

Last year’s Regulator of the Year Award for Asia/Australasia was granted to Michael Sarquis, Executive Director of the Office of Liquor and Gaming Regulation agency of the Queensland Government’s Department of Justice and Attorney-General.

In a statement issued by the organization’s President Jamie Nettleton last August, it was indicated that Mr.Chan would receive the award at the IMGL 2019 Autumn Conference held in Munich, Germany between September 11 and 13.

According to the event’s schedule, the award was granted on September 12 in an event held at the Park Café München GmbH, with a presentation on ‘The Changing VIP Business of Gaming in Macao’ provided by Wang Changbin, Director of the Macau Polytechnic Institute (IPM) Centre for Gaming and Tourism Studies.

Meanwhile, the Regulator of the Year Award – Indian Country was awarded to Jonodev Chaudhuri, a partner at Quarles and Brady LLP. While the Lifetime Achievement Award – North America was granted to the Executive Secretary of the South Dakota Commission on Gaming, Larry B. Eliason.

Mr. Chauduri and Mr. Eliason were said to be present to receive their awards at the IMGL Reception and will attend this year’s Global Gaming Expo (G2E) to be held in Las Vegas in October.