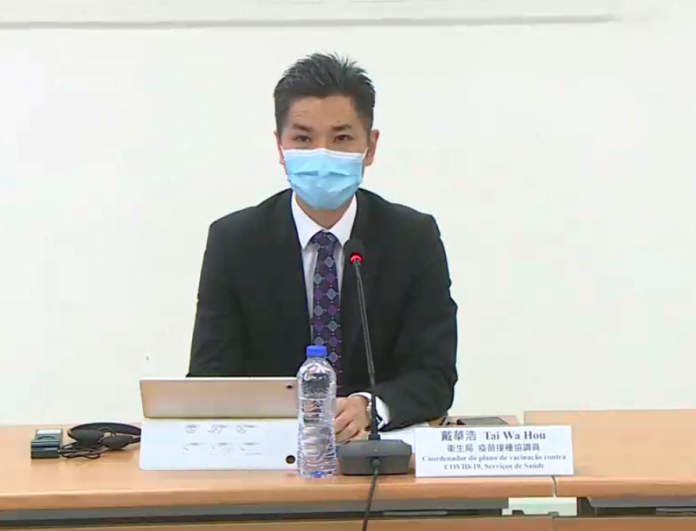 The local vaccination for people over 12 years of age, has reached 66 per cent, health authorities stated today (Tuesday), with the highest rates reported in residents between 20 and 50 years of age.

Vaccination is still not allowed for people under 12 years of age, therefore residents over that age were defined by authorities as to the current target group.

Speaking in today’s pandemic update press conference, the coordinator of the local vaccination plan, Dr. Tai Wa Hou, indicated that the vaccination rate in the age groups between 30 and 49 years old already exceeds 80 per cent with that of people between 20 and 29 years old reaching 78 per cent.

Health authorities have also noted a boost in vaccination appointments in recent weeks, after Zhuhai authorities indicated future entry requirements would likely demand at least one shot of a Covid-19 vaccine.

Authorities also indicated today that they would not oppose if organizations, companies or entities require employees or members to be vaccinated with at least one dose of the new crown vaccine and hold a 48-hour test negative certificate to attend certain events or activities.

It was previously expressed that the current ‘zero cases’ policy followed by the Macau government will remain until vaccination rates reached at least 80 to 90 per cent of the local population.

Dr. Tai also addressed that the Health Bureau expects a third booster shot will be required but are still analysing when it should be applied.

If implemented, the need for a third shot would target high-risk population sectors who already got both required vaccine shots, such as people with chronic diseases or low immune levels, or people in frontline positions, medical staff, cold chain workers, etc.

“However, such policy would only be advanced after a high immunity rate is achieved in the city,” Dr. Tai added.