Venezuela’s opposition-controlled parliament on Tuesday blasted the government over the “unacceptable expulsion” of the head of the European Union mission in Caracas with just 72 hours’ notice.

Opposition leader Juan Guaido, the National Assembly president, called it “an outburst of arrogance, a new outburst that seems like madness on the dictator’s part.”

Maduro and his government were trying “to appear strong in a moment of institutional weakness,” he added.

Guaido, who last year declared himself interim president, earning the support of more than 50 countries, said the opposition’s ties with the EU remained “solid.”

The EU reacted to Maduro’s decision by summoning Venezuela’s ambassador and calling for the country to reverse its decision.

“Who are they to try to impose themselves with threats?” an angry Maduro said on Monday when announcing the measure.

Relations have been tense since 2017, when Venezuela became the first Latin American country to be slapped with sanctions from the EU, including an arms embargo.

Among officials hit with new EU sanctions on Monday was Maduro-backed opposition legislator Luis Parra, who is challenging Guaido for the leadership of the National Assembly.

Parra declared himself National Assembly president in January while security forces loyal to Maduro prevented Guaido from entering the building for a re-election vote he was widely expected to win.

Initially allies, Parra and Guaido fell out after the former was linked to a corruption scandal relating to a food distribution program run by Maduro’s government. 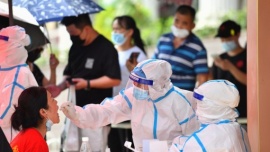 August 1, 2021
Transgender weightlifter Laurel Hubbard makes her Olympic debut in Tokyo on Monday, with the New...

August 1, 2021
As Covid cases surge in Thailand, some Buddhist monks are donning PPE over their distinctive...

August 1, 2021
Iran's ultraconservative Ebrahim Raisi will be inaugurated on Tuesday as the new president of the...
Load more