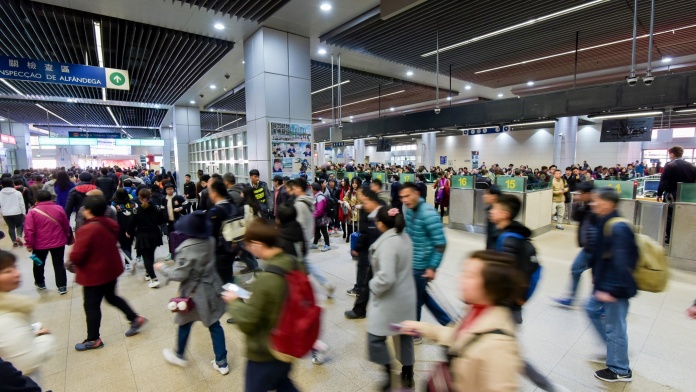 The number of tourist entries and exits in the Macau SAR has decreased by 22.6 per cent in one week as new policies were put in place after local Covid-19 cases were reported in the neighbouring Guangdong Province, police authorities revealed today (Monday).

Between May 31 and June 6 daily tourist entries and arrivals reached an average of 40,000, with visitor movements impacted when compared to the previous week.

People who have travelled to some subdistricts of Guangzhou or Foshan within 14 days are currently required to undergo 14 days of medical observation, with the President of the Association of Macau Tourist Agents, Lao Zileong, having indicated to TDM Radio that these policies led to an immediate decrease in visitors.

The travel agency sector representative also expressed that currently, there is a small number of tourists from Guangzhou and Foshan have entered Macau before the measures take effect.

“Since they are staying legally if the health code changes due to policy changes, some hotels will still allow these travellers to stay, and the industry will continue to implement adequate anti-pandemic measures,” he noted.

According to Lou, it was originally expected that various industries in Macau would recover in the second half of the year but noted that it was now difficult to estimate the hotel occupancy rate during the summer vacation period.

Brokerage Sanford C. Bernstein has also indicated in a note that local daily gross gaming revenues between June 1-6 were down 26 per cent week-on-week to MOP225 million.

Guangzhou has detected four local Covid-19 cases in the past 24 hours, the China Health Commission announced today, bringing the recent total to more than 100 since May 21.

In response to the new cases starting from 10:00 am on June 8, 2021, all persons travelling between Guangdong and Macau must have a negative nucleic acid test report made within 48 hours before entering the country.