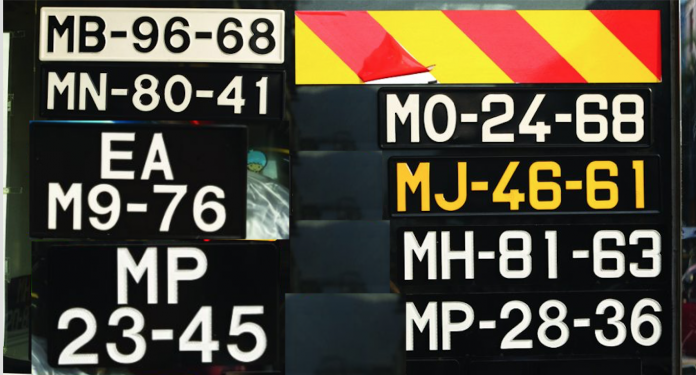 In most countries, a vehicle plate only has one function, which is to uniquely identify the registered vehicle, but that’s not what happens in Macau.

Incidentally, Macau is not the only case-not even the most visible.

This year in Dubai, a licence plate was purchased at an auction for some MOP6.9 billion, an amount that would be enough to buy several Ferraris or Bugattis.

What is special about Macau is that auctions are carried out as a sealed bid, unlike in many other parts of the world, like Hong Kong, where auctions are open and contested.

In other words, buying a licence plate in Macau is part of a kind of ‘long shot’, in which the only two factors to take into account when evaluating the price are what each one is willing to give or what happened in previous auctions. On other words, the recent transaction price of a similar plate should be a reasonable choice, if not the best choice, because this is publicly available.

To learn more about how these auctions work, but above all, how to determine the price in advance, four researchers from the Faculty of Business Administration, University of Macau, researched the subject and have just published “Anchoring effects in repeated auctions of homogeneous objects: Evidence from Macao.“

“We examine the value impact of anchoring bias on auction outcomes by utilizing a unique dataset of a natural experiment in which vehicle plates in Macao are auctioned on a regular basis,” they wrote.

“Anchoring effect and anchoring bias are used interchangeably, which refers to the tendency of relying on pre-existing information without going through a rigorous research and thinking process,” explained to Macau News Agency one the authors, Lewis Tam.

Such a unique institutional setting produces a well-organized panel data of auction results of numerical sequences, which facilitates the estimation of “rational” prices and the design of powerful tests for the anchoring effect, the paper said.

“Our prediction model is able to capture 80 per cent of variation in winning bid prices, which suggests people on average value vehicle plates according to those characteristics in the model. Therefore, it is reasonable to argue that the model predicted price is the ‘rational’ price. Similar to stock market efficiency, this argument is subject to debate,” Mr Tam also said.

“The result suggests that when bidding on a vehicle plate, bidders anchor to the previous winning bid price of a plate with an identical numerical sequence but different prefix,” is one of the conclusions.

“Besides, vehicle plate auctions are English open auctions in Hong Kong, but sealed-bid first-price auctions in Macao. Unlike Hong Kong, special vehicle plates in Macau are transferrable and hence can be considered a kind of investment,” Peter Chui, Lawrence Fong, Jinjuan Ren and Lewis Tam wrote.

A fee of MOP3,000 is required if the plate changes hands, to try to reduce speculation and the underlying business, but regular plates in Macau are obtained at no cost.

For the Macau Government, this peculiar interest works as a source of income: in the last year before the pandemic hit (2019), the Macau SAR coffers received MOP11.4 million from the special registration auctions held by the Transport Bureau, which represents a growth of 45 per cent compared to 2018.

Chinese numerology is a key factor for vehicle plate pricing.

“People value a vehicle plate based on their preference, which is linked to their culture,” explained Professor Tam. “People make a bid according to their own values as well as their assessment of other people’s values.”

There are still those people who can be attracted to numerals that have special meanings for their lives, such as birth dates and anniversaries.

Other studies also show that in Chinese societies, apartments with lucky addresses (e.g., on floors that end with a number “8′′ or a homophone for becoming rich) command higher prices, the authors noted.

Returning to the various auctions of 2019 in Macau, it is clear that the plates with numbers six or eight are the most popular.

On the other hand, registrations with repeated numbers are highly sought after, as is the case of MY 66-66, which received five proposals and was auctioned for MOP460,000.

It is also possible to opt for personalised licence plates—and many still remember seeing a Lamborghini Aventador LP700 in Macau that displayed the “ONE” licence plate.

Choosing a name or number for the car costs MOP1 million, and there are very few personalised licence plates (27 until now).