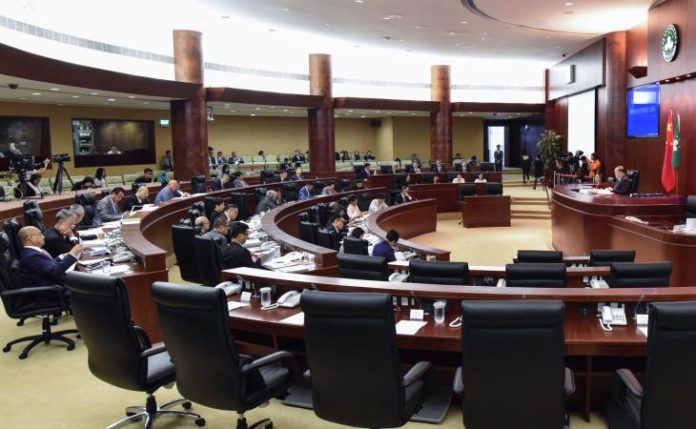 At a plenary session at the Legislative Assembly (AL) last Friday, legislators questioned the government on the utility of the new Pac On ferry terminal in Taipa, and whether its size and capacity are appropriate for the tourism influx of the territory,
Legislator Song Pek Kei described the new ferry terminal as another “white elephant, however she said its better to arrive late than never appearing at all.
The construction works on the new ferry terminal in Taipa, known as Pac On Ferry Terminal, have been completed at a total cost of MOP3.8 billion (US$475 million), as announced last week by Secretary for Transport and Public Works, Raimundo do Rosário.
The new ferry terminal covers approximately 200,000 square meters and is expected to house eight operational berths for ferries carrying up to 400 passengers, and three other operational berths for ferries accommodating 1,200 passengers, in addition to a helipad.
The legislator argued that the ferry terminals capacity seemed underused for its size, noting that the international cruise harbour in Shanghai has only 150,000 square meters, and is able to receive three luxury cruises with 70,000 tonnes, while the larger Pac On terminal is “limited to short passenger routes from Hong Kong and Shenzhen. White elephant on the bay
Legislator Si Ka Lon put forward the same view, stating that the terminal is expected to be able to receive 14 million tourists per year, while in 2015 around 11 million tourists arrived in Macau by sea, according to data from the Statistic and Census Services (DSEC).
“If the design had been closer to reality, it couldve saved a little over MOP1 billion of the MOP3.8 billion spent on the works, and also reduced future operating costs, he said, questioning whether, with the completion of the Hong Kong-Zhuhai-Macau bridge, the Pac On ferry terminal would get even emptier.
Making lemonade
Some legislators said the issue now is to simply try to make the best use of the terminal:
“Since [its] one terminal installation and highly megalomaniac expensive, now what remains to know is how to monetize it to take maximum advantage, legislator Tommy Lau Veng Seng stated.
Tommy Lau suggested Hong Kong should be used as an example of city making full use of its harbours, with its Delta River routes covering more than 10 areas in the Guangdong area. He urged the terminal management to start negotiations with ferry operators to increase routes within the region.
As a way to fully utilise the new project, legislator Song Pek Kei proposed a full development of its interior layout by creating areas for shopping, creative activities and shows, in order to improve the entertainment offered to passengers, and fully utilise the terminal as “the door to Macau.
“If you build just for the sake of building and spend just for the sake of spending, it will never be possible for us to achieve the principle of scientific governance. But it will be, for sure, possible to abuse public funds, Ms. Song added.
GIT hot potato
In regards to other public works, legislator Chan Meng Kam also questioned the government on who would be responsible for the Light Rail Transit (LRT) project after the dissolution of the Transportation Infrastructure Office (GIT) in 2017.
In June of this year, the Secretary for Transport and Public Works announced that the government would create a public company responsible for the LRT metro system and its future management. Chan questioned the proximity of the date of the conclusion of the public tender for the LRT depot superstructure and date of the GIT dissolution, and current coordinator Ho Cheong Kei stepping down as interim Co-ordinator.
“The date of the award [of the tender] will probably be close to the dissolution of the body. So when the Co-ordinator packs his things, if a fault occurs, who will be held responsible? Mr. Chan asked.
The legislator claimed that former GIT interim Co-ordinator Lei Chan Tong, left many problems regarding the design of the Taipa route and the definition of the Outer Harbour route after his tenure, with the former coordinator showing disinterest in continuing those functions and returning to the Housing Bureau.
“With a maximum of 834 days to finish the work, the contract will be awarded to the lowest price? Will it be completed in 2019? No matter what contractor gets the project, if the leader escapes with the work still to be done, who will pay the bill for the residents? Chan questioned.
The LRT Taipa section and depot superstructure will cost an estimated MOP11 billion (US$1.3 billion), with an estimated completion date of 2019.
Uber in China
Legislator Au Kam San raised the issue of the legalisation of Uber ride sharing services, citing recent developments in Mainland China, where local ride sharing service Didi Chuxing acquired Uber China in order to operate it as a separate brand.
“Mainland China has already legalized online car rentals, but in Macau, a tourist city supposedly with a higher degree of freedom, the flexibility in attitude to deal with this matter is much lower than in Mainland China, Au stated.
For the legislator, not legalising Uber goes against the objective of developing Macau as a World Centre for Tourism and Leisure.