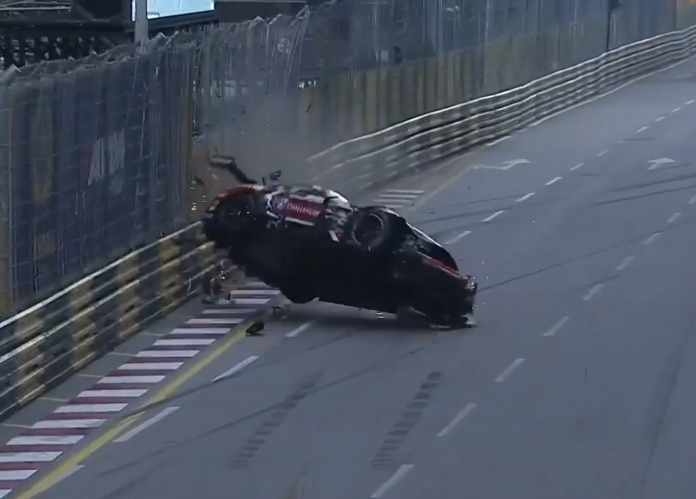 With three laps left to go, the Craft Bamboo Racing Mercedes AMG GT3 driver crashed before the Lisboa Bend, with the already delayed race coming to an end due to low visibility.

O’Young stood comfortably in second when his Mercedes seemingly slipped in oil spilled in the pavement after Ruo Bin Tang blew up the engine of his No. 63 Climax Lamborghini.

Due to the stoppage and the race no longer being resumed due to darkness, O’Young was still classified in second place, behind Leo Ye (Porsche) and in front of third-place finish Luo Kuai Luo (Mercedes).

“I think [me and Ye] had quite an equal start, he had a good run and I was pushing hard. I wasn’t expecting the slippery surface there. I saw [Luo’s car] standing there. The oil caught me up and I went against the wall,” O’Young said after the race.

The Craft Bamboo Racing crew now has a difficult task ahead as the damages in the No.95 Mercedes AMG are considerably high.

“It’s not a good way to end a race obviously, on the final race we always try and keep it clean, it was a bit disappointing, I hope the team can fix the car. I’m sure they will do their best but it’s quite a lot of damage”

Swiss driver Alex Imperatori (Porsche) had to go to the boxes after a tire problem when he was running in third finishing 14th in the race.

The final 12 laps of the Sands China Macau GT Cup are scheduled for 1:10pm of Sunday.