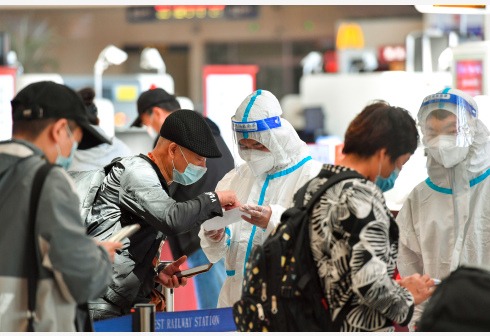 Authorities in the neighbouring Zhuhai city and Guangdong province, have called on citizens to stay put during the upcoming National Day holiday, with individuals who travel across provinces or cities having to complete two nucleic acid tests (NAT) within three days after arriving in Zhuhai.

Zhuhai health authorities have called on citizens to stay in Zhuhai during the upcoming holiday, minimize travel to other cities or provinces, and avoid traveling to medium-risk or high-risk areas.

Those who need to travel to the medium-risk or high-risk areas, must hold a green health code when travelling and are recommended to hold a negative nucleic acid test result conducted within 48 hours.

Meanwhile, all individuals who travel across cities or provinces, are required to carry out two NATs in three days after arriving in Zhuhai, and complete the first NAT within 24 hours of arrival.

Also, Zhuhai residents who travel to other places are advised to only travel between their residences and workplaces for the first three days after returning to Zhuhai, and to avoid taking public transportation and participating in large gatherings.

At the same time, the Guangdong Provincial Center for Disease Control and Prevention has also called on citizens to spend the national day holiday at home, while asking tourists to conduct self-health management when arriving in Guangdong and take the initiative to report their information.

The Department of Culture and Tourism of Guangdong Province also indicated that citizens are required to present a negative nucleic acid testing (NAT) result conducted within 48 hours when travelling by air, trains, and cross-province passenger vehicles or ships.

Also, individuals are required to hold a negative NAT result conducted within 72 hours to enter hotels or tourist attractions.