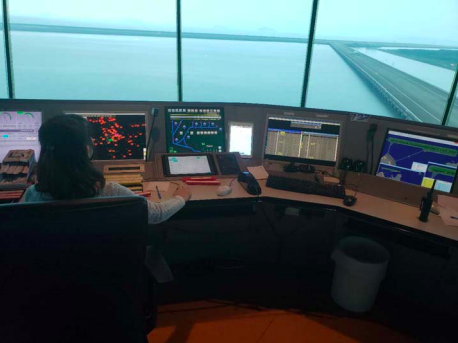 The incident took place at around 6:30am on November 12, 2018 involved a Thai AirAsia Airbus A320-200 aircraft who was granted authorisation to take off from MIA’s runway 34 while a Follow-Me vehicle was still on the runway.

The flight pilots triggered an audio alarm just about when it had started take-off, with the closest recorded distance between the aircraft and the car being 1,480 metres.

No fatal, serious or minor injuries resulted from the incident, with neither the aircraft or the vehicle suffering any damages

According to the report, the tower controller – which held an Air Traffic Controller License issued by AACM in 2006 – ‘momentarily forgot’ about the Follow-me 5 vehicle was on the runway when issuing clearance for the flight to depart.

The report also stated that the tower controller did not check the flight progress strip before giving clearance to the flight, while the ATC supervisor was not present at the working position in the visual control room.

The ATC supervisor stated that he was at the lower level of the control room ‘for water’ with the AACM stating that when another ATC related runway incursion occurrence happened in May 2018, the duty supervisor was also not at the working position, with his absence having a correlation in both incidents.

The involved duty ATC controller was suspended from working as ATC license holder after the occurrence until further On-the-Job Training and competence check.

During September, October and November 2018, manpower was said to be consistent throughout the three months, rostering and shift record was normal, no overtime for the involved ATC controllers was required during the occurrence, therefore the staff would not be overworked at the time of the incident.

The tower controller was even said to have had a day off before the day of the occurrence.

However, technical issues were also found to have contributed to the incident, since although MIA is equipped with a Surface Movement Radar (SMR) – which detects principal features on the surface on an airport, and presents the image on a rada indicator console in the control tower – that system had been ‘unserviceable for over six months’.

The report stated that at the time of the occurrence, a false alert was found presenting at the holding position even if the vehicle has left the area, and the SMR display was being placed a bit far from the controller working position.

‘All these situations of the SMR would have affected the intention of the controllers in utilizing the SMR as a supplement safety measure,’ the report indicated.

The AACM then recommended implementing measures or procedures to minimize distractions or memory lapses for air traffic controllers on duties, with a supervisor or its delegate required to be present at the visual control room all the time during operations.

Controllers were also said to not engage in non-operational activities when manning at controller working positions, while the SMR system was said to have to be kept in good conditions to ensure that the ground movement surveillance system is reliable

May 24, 2022
UK banks and insurers face big hits to profits unless they take immediate action over...

May 24, 2022
US President Joe Biden and Anthony Albanese swapped banter, reminiscences, and even sleeping advice in...
Load more