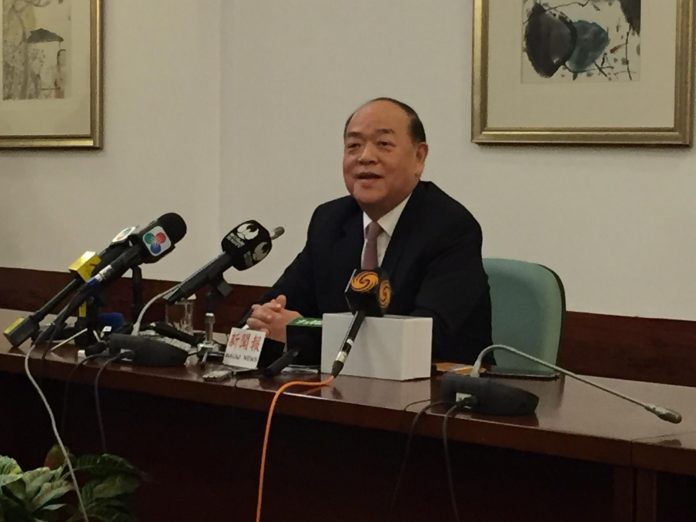 Macau (MNA) – Ho Iat Seng, the current president of the Legislative Assembly (AL), announced on Thursday on the sidelines of a AL session that he will be a candidate for the position of 5th Macau SAR Chief Executive (CE)

Ho claimed, however, that he has not yet been qualified for the election since he is a member of the National People’s Congress (NPC) Standing Committee in Beijing.

The Macau Electoral Law does not allow members of such committee to run for the position of CE since they participate in the electoral college that will choose the next CE.

Ho said he has requested his resignation as a member of the NPC Standing Committee and that he is going to Beijing tomorrow to attend the committee meeting on April 20 to 23.

He also said he was “confident” that the committee would approve his resignation, with the decision expected to be announced on April 23.

The current AL president said he would start organising its campaign team and set the political platform once his resignation was approved by the committee.

Ho has been the AL president for 10 years and a member of the NPC for 19 years. He claims, therefore, he is familiar with the legislative systems of both Macau and Mainland China.

When replying about the reasons for accepting entering the “hot kitchen”, Mr. Ho said “many people put their expectations on me.”

“I could play an appropriate role in connecting the Macau and the Mainland legislative systems,” he told journalists today. “I hope I could bring my legislative experience to the better integration of Macau into the Greater Bay Area and the development of a diversified economic environment.”

He said he also believes that as he was a businessmen for 30 years, he could also lead the business and other industries in Macau to better development, hoping to solve livelihood issues in the city.

However, Mr. Ho added it is “too early” to comment whether he will resign or terminate his position as AL president if Beijing accepts his application.

“I will make the decision [to resign or terminate the position] once I get the reply from Beijing,’ he stated.

The president also said he did not know who would be his contenders, but added he has prepared to face competition during the election.

Legislator Sulu Sou Ka Hou asked Mr. Ho not to participate in the voting of his proposed amendment about the electoral law on the plenary session next Tuesday.

Ho said that since he would attend the meeting in Beijing next Tuesday that the vice-president, Chui Sai Cheong, would replace him at the occasion.

Ho had previously stated he was “seriously and carefully” considering if he would run for the CE position in February.