Ireland plans to vaccinate every citizen in the nation against the coronavirus by September, health minister Stephen Donnelly said Thursday.

“We’re planning our programme based on a supply of vaccines that would mean that every citizen can be vaccinated by September,” Donnelly said in the Dail lower chamber of parliament.

He said the plan is “indicative” and “based on assumptions” about the future delivery of vaccines, some of which have yet to be approved by EU regulators.

“These are tentative timelines,” he told lawmakers — adding that he expected mass vaccination centres to open across the republic in early February.

Ireland does not yet publish daily figures outlining delivery of the Pfizer/BioNTech and Moderna vaccines currently approved for use in the general population.

However Donnelly said 94,000 had received the first dose of a vaccine by Sunday and plans are “on course” to deliver 140,000 by the end of this week.

Ireland has suffered 2,768 deaths from Covid-19 according to latest official figures.

After navigating two previous waves of the virus with low death and case figures, the nation now has the highest per capita rate of infection in the world, according to Oxford University data.

The country of five million is currently in the midst of a third lockdown, with non-essential shops, pubs, restaurants and schools shut for at least the month of January. 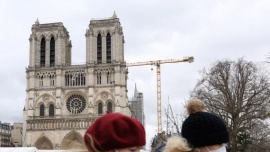