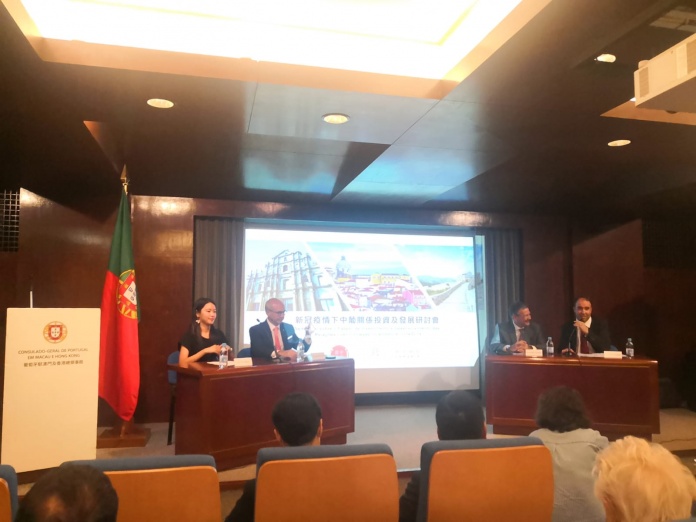 The economic downturn caused by the pandemic could result in more local residents taking proactive roles in forging links between Macau and Chinese and Portuguese businesses, according to the Vice-President of the Portugal-China Young Entrepreneurs Association (AJEPC).

“We, as Macau residents, can assume a more important role in advising and consulting companies. Not just lawyers, but people with a network, connections or resources here. This is important because I’ve seen more and more Portuguese companies that are interested in entering the Chinese market, but they don’t know how to enter,” said Un I Wong, a lawyer at MdME, specialised in consultancy services to Chinese companies, and clients with investments in Portugal.

The comments were delivered yesterday (Thursday) at a seminar on investment, and development of Portuguese-Chinese relations under the Covid-19 restrictions. The event was organized by the Portuguese-Chinese Chamber of Commerce, AICEP Portugal Global and the MdME law firm.

The lawyer noted that those companies would probably consider establishing links with Macau, considering its historical role in Portugal-China relations, despite many local residents’ knowledge of the reality in Portugal, or even in mainland China, being quite low.

“This is something we can change […] it’s something we can leverage. We, as Macanese, should know better how to, for example, help Portuguese tech companies reach Shenzhen or other cities in the Greater Bay Area. Most Macanese are very focused on the local market and don’t go much outside of it […] in this case we can’t perform our role,” Un added.

However, the lawyer predicted that the impact of the pandemic on local drivers of the Macau economy, the gaming and tourism industries, could force some residents to find alternatives in terms of their professional path, and take a more entrepreneurial route.

“Before the pandemic, I think too many people were too comfortable; Macau is safe but maybe it’s too safe,” she stated.

The legal consultant also underlined how most local investors will likely not pump money into large sectors like infrastructure or energy, but since SMEs represent almost 80 per cent of the local company framework, they could still find opportunities in smaller Portuguese sectors.

“Some products are well known, like wine and cheese, but some companies are looking for alternatives. I know some people trading in soap, stones, cork materials,” she added.

Finally, Un underlined that despite many ongoing Chinese investment projects in Portugal having been “postponed and some cancelled, due to uncertainty” and how investors are “more prudent and cautious”, their interest in Portugal is “still there”.

At the same seminar, CEO of Banco Nacional Ultramarino (BNU), Carlos Cid Alvares, noted how despite the pandemic, trade between China and Portugal continued to grow.

Last year, trade volumes between the two countries increased by 4.82 per cent year-on-year to US$6.9 billion dollars, and is up 18 per cent in the first half of this year.

“Even with the ongoing situation, trade between Portugal and China has remained at positive levels. But Portugal is still only the 68th-largest trade supplier to China, while China is the 12th-ranked supplier to Portugal, so there is still room to grow,” Cid said.

The BNU CEO noted that in terms of investment, Portugal was a “very beautiful bride” and ranked 10th among most attractive economies for foreign direct investment (FDI) in 2020, by number of projects.

According to data from the Ministry of Commerce of China, as of the end of 2018, Chinese investment in Portugal hit 2.525 billion euros, the seventh highest in the country.

As for investment going the opposite direction, Cid also felt that the downturn in the local economy could be a catalyst for its diversification, and push local entrepreneurs to other shores.

“Macau has to diversify its economy, as the pandemic showed we can’t just depend on one sector’s growth. Local professionals have a lot of knowledge in gaming, real estate, consultancy […] What we can do is join hands between the Macau entrepreneurs and people in Portuguese-speaking countries that know how to do business abroad,” he noted.

“Portugal has many good companies competing with the best on the international market in sectors such as pork, moulds, textiles. Why not have Macau companies, who know the Chinese market, join hands with these and try to do business in the value chain of large companies in China?”

Meanwhile, António Trindade, CEO of Macao’s CESL Asia – Investments & Services Limited, pointed out that just lifting some restrictions on Portuguese products, as was the case in 2019 for Portuguese frozen pork and swine offal, could improve business relations between the two nations even further.

In 2019 CESL Asia, through its subsidiaries Focus Platform and Focus Agriculture, officialized in Lisbon, acquired Monte do Pasto group from Portuguese bank Novo Banco in a transaction valued at 37.5 million euros (MOP331.9 million/US$41 million) and has since concentrated its efforts on producing quality sustainable beef for export.

“However, although we can currently export to Macau or Hong Kong markets, we cannot export to mainland China. We produce very high-standard sustainable food products […] but we can’t take it to China, a country that needs food security. Those are barriers,” Trindade noted.

The local businessman also noted one of the few specific elements included in the Greater Bay Area development plan, concerning Macau’s role in promoting the international mutual recognition of professional qualifications, and providing support and optimal conditions for the inter-regional, inter-professional and inter-organisational flow of talents.

“This is a huge depth of economic and social policy, specifying a contribution for something China does not have,” he added.