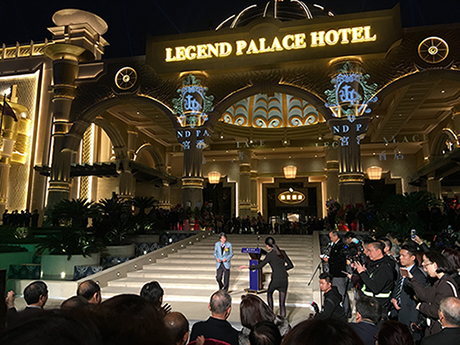 Macau Legend Ltd. recorded some HK$107.5 million (US$13.7 million) in losses during the first six months of 2019, after having generated some HK$2.8 bln in profits in the same period of last year, according to the company’s interim report.

The group explained that the losses recorded in the first half of 2019 was mainly due to the completion of the disposal of The Landmark Macau in April 2018 and decreased contributions from operations at Landmark Casino and The Landmark Macau.

However, the group’s revenue went up 13.7 per cent year-on-year to some HK$1.08 billion for the six months ended June 30 this year, with gaming revenue rising 28.7 per cent to approximately HK$867.5 million.

Concerning Legend Palace casino, mass table results saw a 20 per cent increase to HK$2.9 billion in the first half of 2019, but VIP tables declined from HK$10.9 billion to HK6.6 billion, down by 39.6 per cent.

Meanwhile, in the Babylon Casino the group recorded a 141.3 per cent year-on-year growth in its VIP table results to about HK$652 million, while mass market revenue increased by 51.8 per cent to HK$604 million.

The group also provides hotel services at the Savan Legend Resorts in Laos, with the property’s casino recording a decline in gaming results HK$10.6 million.

Adjusted EBITDA for the group reached some HK$151.5 million, indicating a 24.5 per cent of drop year-on-year.

The group claimed that it has completed the “consolidation of all of its Macau’s operations” at Macau Fisherman’s Wharf (MFW) and will focus effort on the continued improvement and repositioning of MFW within the Peninsula market, including new gaming and non-gaming facilities, expanded food and beverage, entertainment offerings as well as promotional activities targeting both the tourist and mass gaming markets.

Re-design of the construction of the Legendale Hotel is also now in progress in order to meet the height requirements of the relevant government authority in Macau.

Concerning the group’s integrated resort project in Cape Verde, Macau Legend stated that the construction plan of the hotel and casino complex is currently being revisited.

‘In the meantime, the exterior architectural work of the office building has commenced. A bridge and access road are now under construction to connect Santa Maria Islet and Praia. The structural bridge has been completed and final layers for the access roads and other landscaping works are expected to be completed by late 2019 as the first milestone of the project,’ the group added.

June 28, 2022
The European Central Bank will go "as far as necessary" to fight inflation that is...
Load more