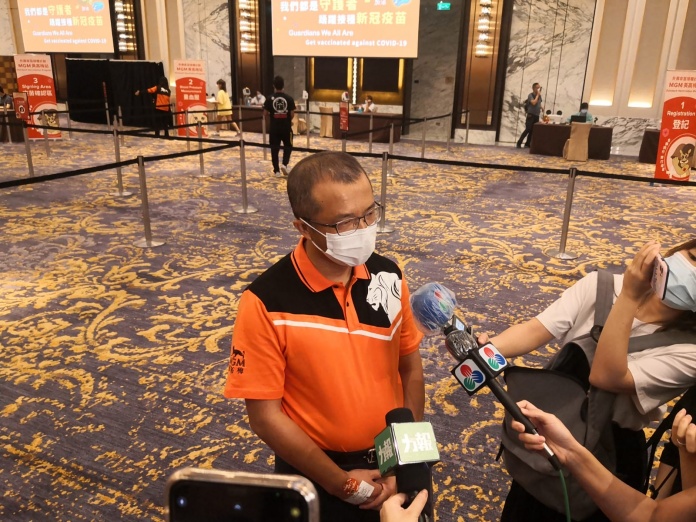 “I think we had a pretty strong Golden Week and we are in a good recovery mode. We have high expectations for a strong Summer holiday period as shown by the past holiday. Not only for Macau but for other mainland destinations […] Macau remains the safest and most convenient destination market outside mainland China,” Xiaofeng stated today during an MGM China vaccination initiative.

MGM China adjusted property results contracted to HK$84.3 million (US$10.8 million) in the first quarter of this year from the HK$367.2 million reported in the three months prior, but with the group’s net revenues jumping by 9 per cent quarter-to-quarter to HK$296 million.

The gaming operator also indicated that the group’s Labour Day Golden Week bookings reached 2019 levels close to full occupancy, with hopes that the holiday period would become a ‘turning corner’ for the local gaming and tourism industry.

According to gaming analysts, during the Golden Week holiday period between May 1-5 average daily revenues reached some MOP600 million, however daily averages have already dropped by more than half in the following weeks.

However, visitation numbers in this year’s Chinese New Year holiday period were seriously impacted by a string of local Covid-19 cases in Mainland China, with fears that a recently discovered case in Guangdong could also impact visitor numbers.

After a community Covid-19 case was detected in the neighbouring Guangdong province this weekend, local authorities decided to apply a 14 days quarantine to all individuals who 14 days prior to entering the city have been in the Jinlong Community, Longjin Sub-district, of the Liwan District of Guangzhou.

“In the past six months, there were sporadic cases in various parts of mainland China. Chinese authorities took very dramatic and quick actions to contain those cases so we are confident this will also happen when it comes to the Guangdong case,” the MGM President added.