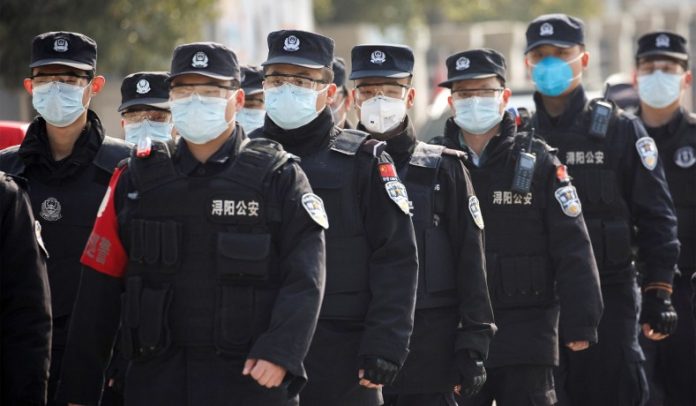 Social conflicts emerged in some mainland Chinese regions where unemployment has been rising. In early May, a hawker used a knife to attack several urban management officials in Shenzhen. On May 3rd, in Jiangxi, reporters were not allowed to cover a story that, according to a Hong Kong-based human rights organization, showed a family tragedy of witnessing the death of five members due to unemployment disputes. On the same day in Hubei, nine people were injured by an unemployed person who waved a knife to attack residents on the streets. On May 4th, in Guangdong’s Maoming city, three people were injured on the streets. On May 6th, two children were attacked by a man outside a school, leading to a death and an injury.

In anticipation of social conflicts, on April 21st, Guo Shengkun, a member of the Politburo and the Political and Legal Commission, was appointed to lead a Construction and Coordination Committee on Peaceful China. Guo remarked that this committee had to fight crime and triads, to resolve social contradictions, to maintain public security, to reduce the risks of internet, and to mobilize all resources to stabilize the society. The concerns about social stability are unprecedented in the Xi Jinping era.

As early as January 28th, the Minister of Public Security, Zhao Kezhi, said in public that public health problems could not be allowed to destabilize the society. On May 7th, Zhao stressed in a national police conference that the police had to implement the spirit of President Xi Jinping’s thoughts. Zhao said that the police had to be united, to obey the leadership of the Chinese Communist Party (CCP), to maintain the party’s purity and discipline, to maintain law and order. Zhao added the police’s surname was the party, including the police in 31 provinces, cities, and Xinjiang. According to Zhao, political work was of utmost importance to the police, and the police are under the dual leadership of the superior command and the CCP. Social stability was significant, Zhao added. Moreover, police work must be modernized and professionalized, including the coordination with regional and international police and the effective management of crises. Big data had to be deployed to control crime, while community policing had to be enforced. Auxiliary police had to be expanded and the welfare of police officers would be safeguarded. Meanwhile, Zhao vowed to fight against the “protective umbrella,” implying the need to prevent corrupt elements from infiltrating the police. Zhao’s remarks took place amid the downfall of Sun Lijun, a deputy minister of public security, who was arrested for corruption in late April.

The concern about social stability could also be seen in President Xi Jinping’s speeches. On May 6th, President Xi made a speech in the Politburo Standing Committee (PSC) meeting, saying that the central government had to send leading groups to Hubei province and other areas to implement the strict measures of containing COVID-19. He added that the cases of COVID-19 came mostly from places outside China, and that all provinces had to guard against the return of COVID-19. President Xi urged Hubei and all other provinces and cities to treat containment work as “normal,”  plugging any loopholes and forging ahead with economic production.
On May 14th, President Xi again made comments on COVID-19 in the PSC meeting, pointing to the need for Jilin and Heilongjiang provinces to strengthen their work containing COVID-19. He said that Beijing would have to consolidate preventive work before the meetings of the National People’s Congress (NPC) and Chinese People’s Political Consultative Conference (CPPCC). Xi stressed the necessity of border quarantine work and of deepening international cooperation, adding that border control would continue to be maintained rather than being relaxed in the short run.

The president has also become active in his inspections about two weeks before the postponed NPC and CPPCC meetings. He inspected Shaanxi province’s Datong City, emphasizing the importance of anti-poverty work and agricultural production. He visited family households, presenting an image of a populist leader close to ordinary citizens at the grassroots level.
Prior to the Shaanxi trip, President Xi had paid a visit to Shanxi from May 11 to 12, inspecting farmland and cultural heritage sites. He stressed the importance of poverty alleviation work and the assistance of the masses through the provision of loans and farm insurance.

On May 8th, President Xi convened a meeting with some non-party members and business people, exchanging views on the work containing COVID-19. He said that, although Hubei province was generally successful in containing the virus, China has to remain highly vigilant and to achieve an affluent society through the combined measures of economic production, schools resumption, and poverty alleviation efforts.
President Xi’s concerns about social stability was echoed by Premier Li Keqiang, who, on April 22nd, convened the meeting of the leading small group on COVID-19, with the presence of deputy director Wang Huining. Premier Li said that economic production would continue and that work teams had to be dispatched to all those places where infection cases reoccurred. He added the importance of information sharing, prompt reporting, the cadres responsibility system, and the necessity of preventing individuals to gather together, especially in hospitals where infections could take place easily.
On April 27th, Vice Premier Sun Chunlan, who led the leading small group to oversee quarantine work in Hubei province, returned to Beijing. But, on May 4th, the State Council’s deputy secretary Ding Xiangyang was sent to lead a coordination work group to Hubei to continue overseeing the containment work in Hubei. The work group decided to implement community-based quarantine work, extend the testing of ordinary citizens, pay attention to hidden virus-carriers, care about the rehabilitation of patients, ensure schools resumption, supervise economic reproduction, and to forge public-private partnership in the containment of COVID-19.
The highly vigilant approach adopted by Beijing was understandable as some provinces continued to see outbreaks of COVID-19. On May 10th, the Jilin province was on high alert as there were 11 cases of infections in Lanshu city. On May 11th, Changchun city’s leading small group on the containment of COVID-19 announced that 14 days of centralized quarantine work were imposed, in addition to seven days of self-quarantine in Lanshu.

On the other hand, there were unconfirmed reports that a few dissidents in China openly criticized the central government for handling the outbreak of COVID-19 clumsily. According to rumours, a member of the princeling faction sent an open letter to NPC and CPPCC members, criticizing the central leadership for its handling of COVID-19.
It remains to be seen how the NPC and CPPCC meetings will unfold.
Finally, the Chinese government attaches great importance to border security amid COVID-19. On May 11th, the Indian and Chinese troops had a clash at the border of Naku La where some of them came into brawls. Eleven soldiers were injured, including four Indian soldiers and seven Chinese counterparts.
On the other hand, the People’s Liberation Army (PLA), in late April, sent COVID-19 testing supplies and medical expderts to Cambodia, Pakistan, Burma, and Laos, forging international cooperation to fight against COVID-19.

The PLA has also been active near Taiwan. On May 8th, the Chinese military planes went into Taiwan airspace, leading to a prompt reaction from the Taiwan side to call for the mainland Chinese planes to leave. From May 14th to July 31st, the PLA is going to conduct military exercises in Tangshan Harbour and no other ships and boats are allowed to go to the region.
As early as April 10th, the U.S. reconnaissance plane flew near Taiwan airspace. Both, the Chinese and U.S. militaries, have become more active in the Taiwan Strait than ever before, raising concerns about whether a military accident may erupt suddenly.
From an objective perspective, the PLA is keen to protect the Chinese border security, as with the actions of the police in dealing with domestic security.
In short, amid the outbreak of COVID-19, the Chinese leadership has become deeply concerned about not only social and political stability, but also border security.