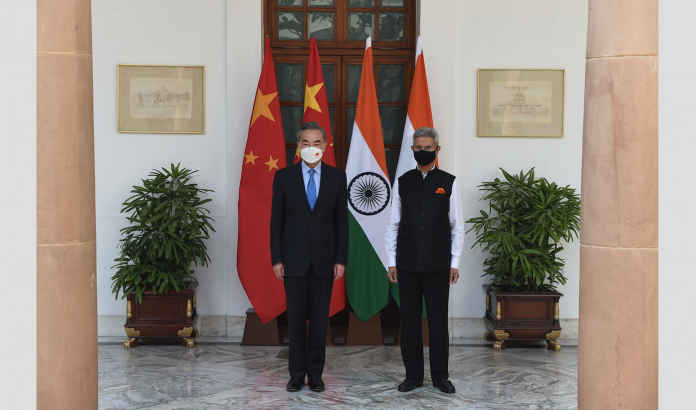 The two-day visit of the Chinese Foreign Minister Wang Yi to India has reached a signficant consensus on the necessity of achieving peace and progress with the Indian External Affairs Minister Subrahmanyam Jaishankar. Although reports on their discussions differed significantly between the mainland Chinese side and the Indian media, their consensus can be regarded as a turning point in the relations between China and India after the military standoff along their border from April to June 2020.

The report in Xinhua emphasized that, according to Wang Yi, “the two countries should strengthen communication and coordinate their stances in safeguarding their legitimate interests as well as the common interests of the developing countries, so as to make respective contributions to peace and stability in the region and the world.”

Wang tried to remind India of the commonality between the two countries in their non-alignment foreign policy – an apex of Sino-Indian relations in the Bandung conference in 1955 when the Chinese Premier Zhou Enlai not only adopted a skillful and moderate approach to dealing with the Indian Prime Minister Jawaharlal Nehru, but also came up with the five principles of “mutual respect for other nations, territorial integrity and sovereignty, nonaggression, non-interference in internal affairs, equality and mutual benefit, and peaceful coexistence.”

Although the Wang-Jaishankar meeting did not reiterate these five principles of peaceful coexistence, both China and India have been adopting a relatively neutral approach to dealing with the Russian-Ukrainian conflicts – one of the topics in their discussion. Ideologically and militarily, however, India has slightly moved closer toward the Western alliance in the recent years, mainly because of its perception of the “China threat.” The recent reinvigoration of the Quadrilateral Security Dialogue or QUAD has shown how India has been viewing China and allying with Australia, Japan and the United States in the security dimension. The ideological affinity of capitalist democracies has also made Australia, India, Japan and the United States much closer and easier to enhance their security cooperation. Yet, the Indian position on Ukraine has already raised the eyebrows of other QUAD members, especially US President Biden who has recently commented that the Indian position on Ukraine is “shaky.”

Most interestingly, when the Indian External Affairs Minister Subrahmanyam Jaishankar attended the press conference, he did talk about the commonalities between India and China. Jaishankar referred to three principles adopted by both India and China in international relations, namely “mutual respect, mutual sensitivity and mutual interest.” As such, these new principles have stood out as one of the main breakthroughs and common understandings between the Indian and Chinese foreign ministers. The Indian foreign minister also admitted that India and China had “common elements” in the Ukrainian issue, namely “immediate ceasefire, diplomacy and dialogue.” Perhaps the unintended consequence of the Russian-Ukrainian conflict was that it has provided a golden opportunity for India and China to reflect on and come up with their common approaches to coping with international conflicts.

A striking difference between the Xinhua report of Wang Yi’s visit and the Indian media’s questions directed at Jaishankar was that while the official Chinese media stresses India’s willingness “to strengthen communication with China and increase mutual trust to get their relationship out of its current low as early as possible,” the Indian reporters were far more interested in how China deals with the border dispute with India – a topic that was featured as the most important one in Jaishankar’s statement in his press conference. The Indian external affairs minister reiterated the words “disengagement” and “de-escalation” twice in his press conference and his response to reporters’ questions, showing India’s position that “a large deployment” of Chinese military along the border with India remains an “abnormal” situation that has to be rectified. Encouragingly, however, Jaishankar admitted that the 15throunds of talks between the senior commanders from both sides made progress, albeit such progress was “slow.” The remarks of Jaishankar on the progress made in the border talks were also reported in Xinhua – a phenomenon showing that the Chinese side attaches importance to progress in talks that aim at resolving the border dispute.

Another report from Xinhua focuses on the positive outcome in the Wang visit. On March 25, the Xinhua report pointed to the three-point approach adopted by Wang Yi tin his meeting with the Indian National Security Advisor Ajit Doval. First, both sides should see bilateral relations with “a long-term vision.” Second, both China and India should “see each other’s development with a win-win mentality.” Third, “both countries should take part in the multilateral process with a cooperative posture.” Clearly, the official Chinese media adopts a positivist approach, as with Wang Yi, in dealing with the China-India bilateral relations. On March 26, the Hong Kong TVB news stresses that Wang Yi’s said the border issue “should not affect bilateral relations” between China and India, and that it should be “put in a suitable position.” In other words, the Chinese side wishes to compartmentalize the border dispute within the border framework of making progress in bilateral relations – an approach that remains to be digested and accepted by the Indian side.

This compartmentalization of the border issue within the broader framework of making progress in bilateral relations could be seen in the three-hour talk between Wang and Jaishankar. In the press conference in New Delhi, the Indian external affairs minister revealed that he “took up strongly the predicament of Indian students who cannot return to India due to the Covid-19 restrictions” in China. He revealed that Wang Yi promised to talk to local authorities in China.

The Indian external affairs minister also unveiled that he expressed the Indian “objection” to a remark made by Wang Yi during the latter’s attendance in the Organization of Islamic Cooperation (OIC) meeting in Pakistan. The Indian media reported that Wang Yi had mentioned that China shares the same hope as the OIC on Kashmir. The OIC is reportedly supportive of Pakistan’s stand on Kashmir, seeking a plebiscite in the region to decide its future. In response, the Indian External Affairs Ministry spokesperson Arindam Bagchi remarked formally that matters relating to Kashmir were entirely India’s internal affairs. In fact, some Indian media commentators have recently reminded China that while India did not comment on and interfere with China’s internal affairs, the same approach should be adopted by China. If so, when Jaishankar openly talked about the need to adopt three principles – mutual respect, mutual sensitivity and mutual interest – the point on sensitivity could be interpreted as a gentle reminder to the Chinese side. However, given China’s friendly relations with Pakistan, Wang Yi’s remark in the OIC meeting was perhaps understandable.

Analytically, there are two main positive developments in the Wang Yi visit to India. Both sides affirm the importance of achieving peace not only along the border of the two countries but also in the world. Both sides agree that progress should be made in the issues affecting their bilateral relations, ranging from the ease in which Indian students in China can return home to the “disengagement” and “de-escalation” that are needed along the border of the two Asian giants. From the perspective of reaching consensus amid different positions, Wang Yi’s visit to India can be regarded as a breakthrough in the Sino-Indian relations. At a critical juncture when the Russian-Ukrainian conflict is enhancing the possibility of an emerging new Cold War in the world, the mutual understandings between China and India during Wang Yi’s visit to New Delhi are politically significant. If both China and India adopt a relatively neutral attitude toward the Russian-Ukrainian conflict, and if both countries are the friends of Russia, they have tremendous potential to play the role of peacemakers and middlemen.

Neutrality in international conflicts is difficult to achieve, but if the Indian power elites recall the heydays of non-alignment movement in the mid-1950s during which India was a leader, perhaps the Indian power elites may rethink on whether China should be constantly seen more as a “threat” than as basically a friendly neighbor with a very long history of peaceful coexistence with India.

In conclusion, Wang Yi’s visit to India is a breakthrough in the development of the Sino-Indian relations since mid-2020. Regional and world peace and continuous progress in bilateral relations are the major consensus reached in his path-breaking visit. The border dispute clearly remains a thorn on the Indian side, but with the clear political will expressed from both foreign ministers, it is hoped that disengagement and de-escalation will continue in such a way that China and India will achieve “win-win situation” in their bilateral relations in the coming years. The challenge is whether both sides can and will skillfully handle their border dispute in a compartmentalized manner separate from other practical issues in bilateral relations.