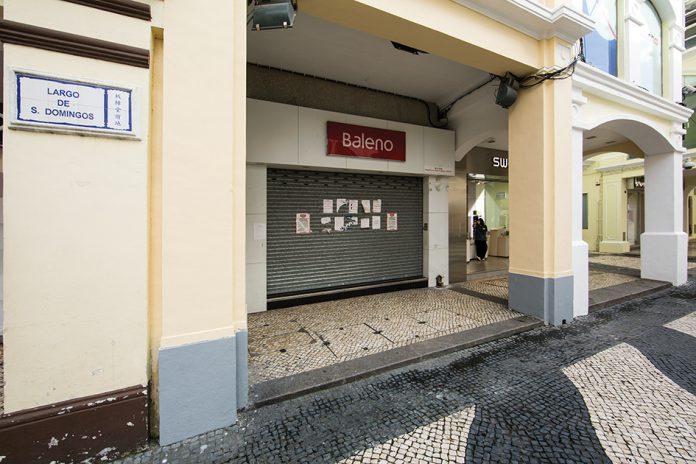 The economic and societal fallout of the pandemic has exposed the precarious position of many of Macau’s workers, and structural problems in Macau’s economy.

The lines of closed‑up shops in the streets of Macau are a monument to greedy landlords and to victims of the pandemic. Walk round the rows of brightly lit shops in the up-market malls and casino resorts, and what do you see? Emptiness; silence save for piped soothing muzak designed to quell any fears of markets in meltdown and to suture a haemorrhaging economy. The economic life-force of Macau is all‑too‑easily drained by a virus that is invisible to the eye.

The pandemic has exposed a fault‑line in Macau’s economy and society: the poor, the weak, the vulnerable, the low-paid hired hands have shouldered much of the burden of the failure of the conjoined twins of money and power to ensure that Macau’s common good is intact. In a prescient volume some 35 years ago, the philosopher Jürgen Habermas noted how the ‘steering mechanisms’ of money and power in society ‘colonize the lifeworlds’ of citizens, affect their everyday lives, along with the Weberian ‘iron cage’ of bureaucracy and the erosion of democracy. He could have been writing about today’s pandemic and Macau, and its repellent impact on the weak and unprotected in every sense, the onslaught of poverty and the threats to humanitarianism.

How is it that we see luxurious limousines gliding down the streets of boarded‑up shops in Macau, past the pavement gaze of the unemployed in their cheap plastic chairs who sit watching the world go by because they have no jobs and nothing to do? The Rolls Royces and the Lamborghinis steer past the pitiful bent, elderly collectors of cardboard as they try to make a few patacas. Do the drivers give a thought to those sitting in a dim apartment in quiet despair whilst they drive home to their plush, multi‑million dollar apartments?

If the pandemic has shown us anything, it is that inequality in Macau is profound, naked, uncaring and merciless. It also shows that, underneath the glitz and glamour of Macau, actually its economy is fragile, and that the failure to meet the long called‑for need for diversification and structural economic reform is coming home to roost.

It’s OK if you are one of the wealthy. You can weather the storm. Neoliberalism’s enlightened self-interest which renders human life a market place commodity, under the guise of individual freedom, has made you content to turn people into disposable workplace objects, reserve labour, who can be hired to boost your profit‑making business when times are good, and then fired peremptorily when things get rough. You, the boss, continue your lavish lifestyle, at ease with your riches, living in your protected bubbles, happy to forget the desperation of those lining up at food banks, parents wondering how to feed their children, and lone pensioners killing time by wandering the streets because it costs nothing. Concentrating gross wealth in the hands of a few is alive and well in Macau.

If the much‑used appeal to social stability in Macau is to be more than a slogan, a pacifier in the mouth of the underclass, then redressing such inequality is an urgent need. Inequality in Macau cannot be bought off by handouts here and there, a few short‑term band‑aid plasters to give the impression or pretence of care but covering up a mortally wounded structural economic and societal problem.

In a 2008 interview that Habermas gave to Thomas Assheuer of ‘Die Zeit’, he was asked for his views on the collapse of the financial system internationally. His response (in translation) resonates with Macau society today: ‘What worries me most is the blatant social injustice, which consists in the socialized cost of system failure hitting the most vulnerable social groups hardest. Now the majority of those who are not among the winners … will be asked to pay again for the real economic consequences of a foreseeable malfunction of the financial system. And not in monetary terms like the stockholders, but in the hard currency of their everyday existence. … [The situation] gives investor interests a ruthless dominance, which accepts growing social inequality, the emergence of a precarious state, child poverty, low wages and so on’.

Despite repeated mantras of social stability, the pandemic fallout in Macau reveals its economic and social frangibility and structural inequality: surely an agenda for Macau’s new Legislative Assembly.