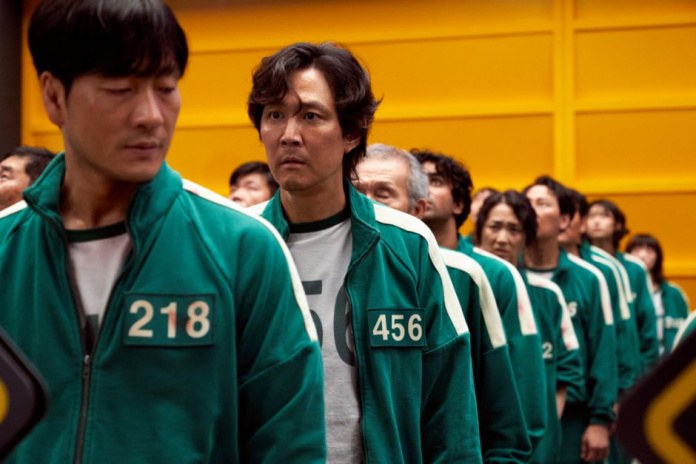 In the recently wildly popular Korean TV series Squid Game, a group of individuals deep in debt agree to play a series of games in which the ultimate prize is more money than any of them can imagine – but the stakes of each game are literally life or death.

During the game, participants are regularly ordered to wake up, line up, or carry out multiple other games or tasks announced by a public announcement system employing an eerily polite woman’s voice resembling an airport announcement.

Participants are not given any explanation or brief on the reasons they have to carry out most tasks during the game.

Meanwhile, in Macau, the local population is sometimes also ordered to simply carry out tasks on a seemingly life-and-death game with very few explanations provided.

The local pandemic prevention command centre has recently decided to define target groups for high-frequency testing, which include both residents and non-residents who work in renovation works, laundries and security activities, with all Nepalese and Vietnamese non-resident workers currently in Macau also included in the test round.

Health authorities defended their decision to include both these nationalities as non-discriminatory and based on a risk assessment that took into account that the recent outbreak in the city included confirmed cases of these nationalities.

Setting aside the fact that testing all workers in a certain sector just because some confirmed cases include some employees in this sector seems like gross overkill, testing everyone from a certain nationality verges on the absurd, especially after two mass testing rounds have already been completed.

These groups will have to be subjected to four nucleic acid tests, interspersed by one day, to be completed until October 19, with about 15,000 people believed to be covered by the order.

However, the worst impact it creates is stoke public perceptions that these two nationalities are in any way to blame for the recent outbreak.

Chief Executive Ho Iat Seng has previously urged residents to not blame security guards for the recent outbreak, however, these calls for avoiding the blame game were immediately undermined by the health authorities when they singled out target groups not just by employment but by nationality.

Health Bureau representatives tried to tidy up their position by addressing that such groups were not considered as ‘high risk’ but only interest target groups.

Conde S. Januario Hospital Clinical Director, Dr. Tai Wa Hou even expressed that people included in the target group do not present a higher risk of contagion and continue with the green health code, and defined them as “just normal citizens, not different from other people”

Still, the damage has already been made.

Some local businesses went as far as placing door signs barring Nepalese or Vietnamese nationals from entering the premises, in an outright contravention of the equality principles under the Macau SAR Basic Law.

But who can blame them when health authorities themselves had already breached the non-discriminatory principles in the same legal foundation?

It should be remembered that between September 24 and October 9, a total of 14 cases were diagnosed in Macau, of which five cases involved Nepali citizens, four mainland Chinese citizens, three Vietnamese, one Hong Kong resident and one Macau resident of Turkish nationality.

We have seen thousands of pandemic prevention measures issued in the last two years, some completely justifiable and grounded on scientific facts, and others that just resonate as arbitrary and inexplicable.

If residents start believing measures are applicable without basis, their willingness to follow them can waver.

For example, the fact that a luxury residence in Areia Preta was not designated as a red lockdown area when a domestic helper working and living in the building was confirmed as a new Covid-19 case even led to a public discussion of unequal treatment by social status.

While all residents were allowed to leave the premises of The Bayview Bloc 3 tower after nucleic acid tests, residents in several areas in the same district in lower real estate value echelons’ were quarantined for 14 days following similar links to confirmed cases.

Unclear or seemingly arbitrary measures feed public doubt so it is of utmost importance authorities go out of their way to be transparent and clearly explain the criteria behind their pandemic prevention decisions.

In ‘Squid Game’ participants are allowed to quit the game if the majority agrees to do it. Since that option is not available here, let’s at least make it clear everyone understands the rules.