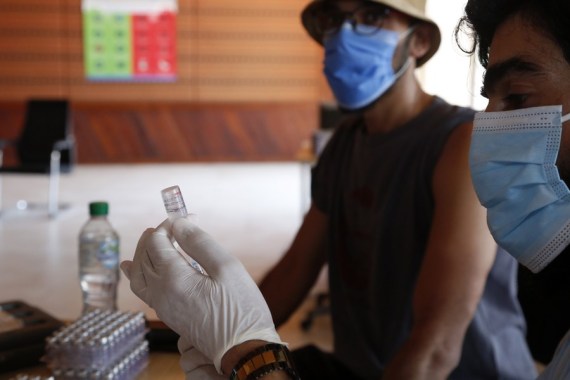 Public servants have complained to legislators that recent guidelines set to boost vaccination rates in the public sector are indirectly forcing them to get inoculated, with the representatives asking authorities to consider different incentives such as providing a two-day leave after getting the jab.

The Public Administration and Civil Service Bureau (SAFP) recently issued an order to the public sector mandating that after September 27 public workers will have to choose between being vaccinated for Covid-19 or have to carry out nucleic acid testing every 7 days.

Upon entering the workplace, all workers in the Public Administration must present proof of vaccination against COVID-19 or, alternatively, a negative nucleic acid test certificate issued in the last seven days, and any absence from service due to the non-presentation of the aforementioned certified will be defined as an unjustified absence.

Nucleic acid tests must be carried out after office hours and expenses must be borne out by public servants themselves, however, payment will be waived for workers with a medical certificate proving that their health conditions do not allow for vaccination. Time take out from work to carry out vaccination will be considered as a justified absence.

In a public statement legislators Ella lei Cheng I and Leong Sun Iok, connected to the Macau Federation of Trade Unions, the order has “aroused widespread concern among the society and civil servants”.

The new guideline comes after an expert delegation from the National Health Commission visited the Macau SAR and urged health authorities to understand the reasons why citizens do not get vaccinated, increase targeted vaccination campaigns and promote vaccination through community mobilization.

According to the most recent update, a total of 332,204, people in Macau have been vaccinated with at least a dose of either Sinopharm or BioNTech vaccines, about half the local population, but only 291,195 received the required two doses.

After the visit health authorities vowed they would focus on introducing measures to motivate key groups such as medical staff, frontline border workers, civil servants, and school staff to get vaccinated.

“Although the current guidelines do not contain compulsory words, many civil servants and residents have reported that they are worried that employees will be required to be vaccinated when the measures are implemented,” a statement from the legislators indicates.

“For example, as soon as the guidelines came out, government departments required certain groups to be vaccinated before they could participate in departmental activities”.

The legislators also indicated that as soon as the above-mentioned measures were introduced, they immediately received opinions from employees in different fields such as education, gaming and catering, public utilities, social services, and sports.

They then suggested that the government should take the lead and encourage more companies to adopt substantial incentive measures such as vaccine holidays, and provide convenience and support to those who prove to be unsuitable for vaccination, especially exempting nucleic acid testing fees.

The legislators asked the Health Bureau to avoid situations inconsistent with the original intent of the guidelines, and issue clear and operational detailed guidelines, especially to avoid forced employees to “get the jab”, while making proper arrangements for people who are certified by a doctor to be unsuitable for vaccination, such as chronic patients, pregnant women and breastfeeding mothers, to reduce inconvenience.

Today the Macau Civil Servants Association (ATFPM) also issued a statement in which it expresses that since the guideline was issued it received several “comments and feedback from many civil servants” worried about its implementation.

“The public opinion backlash caused by the incident was serious. After receiving and analyzing various opinions, we urgently wrote to the Secretaries for Social Culture and Administration and Legal Affairs, hoping that the two could find appropriate solutions to quell the grievances of such a large number of civil servants”.

The public servant association also underlined that back in June of this year it had already urged authorities to provide a two-day leave scheme for public workers who choose to be inoculated.

September 25, 2021
The Taliban hung the bodies of four kidnappers from cranes after killing them during a...

September 25, 2021
Italy's consumer confidence surged to its highest level in nearly a quarter-century in September, Italy's...