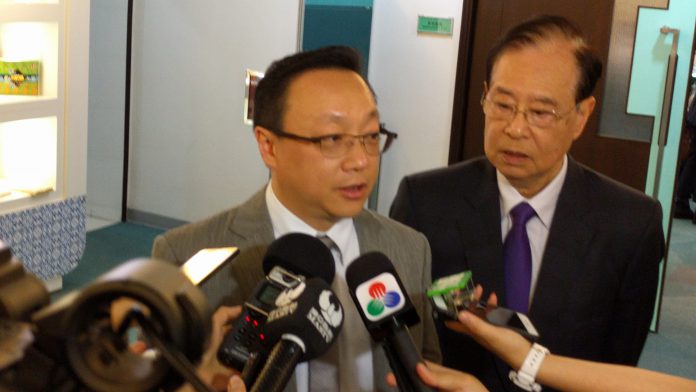 Wang Sai Man, the current employers’ organizations representative at the Standing Committee for the Coordination of Social Affairs (CPCS), will be recommended as a candidate for the Legislative Assembly (AL) by-election on November 24, which will select a new indirectly elected legislator.

Ho Iat Seng, the current Chief Executive (CE) candidate, resigned from his positions as AL president and indirectly elected legislator for the first sector – the Industrial, Commercial and Financial sector – in order to run for CE.

As the by-election is scheduled to be held on November 24, the nomination period will end on August 28.

Previous AL first sector elections never saw more than one candidate running for the legislator position, which would indicate that Wang will likely be the only candidate for the seat.

Wang is also the vice-chairman of Macau Manufacturers’ Association and the president of Macau Textile Merchants Association.

Wang said that he would strengthen communication with the business sector and cooperate with other three legislators of the first sector in the AL, while striving to safeguard the legitimate interests of employers, according to the report of Radio Macau.

Hoi Sai Iun, the former AL legislator and the Life Honorary Chairman of the Chamber, will be the surrogate for the nomination committee.

Mr. Hoi told the media that once the nomination committee was confirmed by the AL Electoral Affairs Committee (EAC), it will submit the candidate’s information and political platform to the EAC.