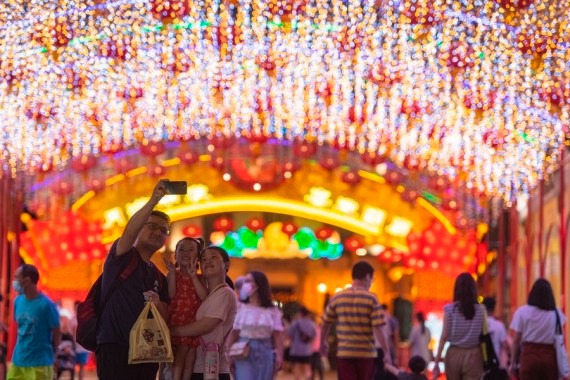 Both the Macau government and analysts have a cautious forecast for the gaming and tourism performance of the city in the upcoming seven-day Chinese National Day holiday break for Mainland Chinese, which starts on October 1.

Speaking with the media on the sidelines of an event on Wednesday (yesterday), Macau Government Tourism Office (MGTO) Director Maria Helena de Senna Fernandes said, “Everyone has expectations for the National Day Golden Week, but there has not been a huge jump in the visitation figure in the past few Golden Weeks after the onset of the [COVID-19] pandemic.”

“So we have a slightly conservative forecast,” she continued. “We hope there will be a stable hike.”

The National Day holiday break is one of the peak seasons for Mainland Chinese, Macau’s larger feeder market, to travel, alongside the Chinese New Year Golden Week.

Macau only received 8,159 travellers in the National Day Golden Week last year due to the travel restrictions over new cases at the time, while the tally was about 156,000 for the same period in 2020. But both figures were pale in comparison with the volume of over 974,000 in 2019 before the pandemic started.

Ms Senna Fernandes also noted they have stopped onsite promotion of Macau in the mainland as some mainland cities are worried about the fluctuations of the pandemic prior to a major holiday break, but they have maintained the online promotion.

She refers to the “Macao Week in Shandong•Qingdao”, a large-scale promotional event organised by the Macau government, which was originally scheduled to take place in the Chinese eastern city between 8 and 12 September, but has been postponed to a later date.

Meanwhile, brokerage Daiwa said in a recent research note that the latest easing of travel restrictions was expected to have limited impact in propelling the city’s visitation figure and gaming revenue in the National Day holiday break.

Since September 19, individuals travelling from Macau to nearby Zhuhai, Guangdong only need to present a negative COVID nucleic acid test result undertaken within the past 48 hours instead of within 24 hours. The local tourism industry has been clamouring for the validity of the test to be extended to seven days.

Daiwa added that the gaming revenue in September would likely end up with a daily average of MOP90-100 million (US$11.25-12.5 million).

Latest official figures show the number of visitors to Macau totalled 3.8 million in the first eight months of 2022, down by 25.8 per cent year-on-year due to the sporadic coronavirus outbreaks here and in the region, while the gaming revenue plunged by 53.4 per cent year-on-year to MOP28.86 billion over the same time period. Since the onset of the pandemic, Macau has only maintained a largely free quarantine travel arrangement with the mainland.