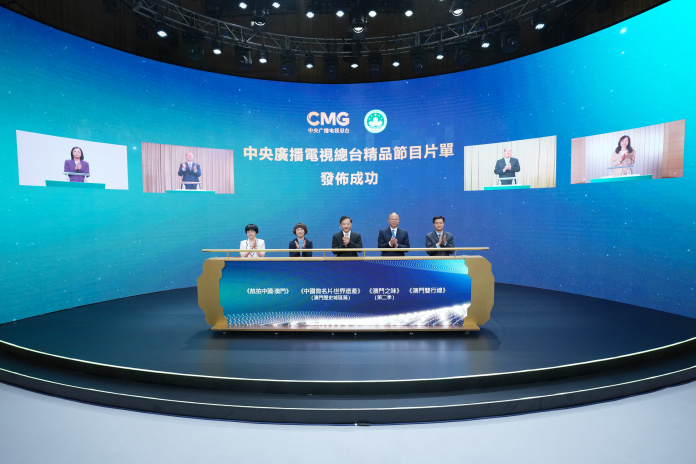 The SAR Government and China Media Group (CMG) have launched a new round of cooperation to further promote Macau’s distinctive cultural image and the richness of the city’s customs.

During the ceremony to launch the new cooperation projects – held online simultaneously in Macau and Beijing on Monday – it was announced the release of four documentaries – covering respectively aerial photography of Macau, the Historic Centre of Macau, local delicacies, and tourism.

Macau Chief Executive Ho Iat Seng said the new round of cooperation would boost the SAR’s role as a centre of tourism and leisure, a platform between China and Portuguese Speaking countries and a a multicultural exchange hub with an emphasis on Chinese culture.

CMG president and editor-in-chief and Vice Minister of the Publicity Department of the Communist Party of China Central Committee Shen Haixiong said CMG “would spare no effort in promoting the voice of the Central Government and stories of Macau”, as quoted in a press release issued by the Government Information Bureau (GCS).

In the same ceremony, Director of the Liaison Office of the Central People’s Government in the Macau SAR Zheng Xincong noted that the new cooperation projects “would inject new impetus in furthering Macao’s integration into overall national development, while realising better development prospects for the city.”

During the online ceremony, member of CMG’s Editorial Board Xing Bo and Chairman of the Executive Committee of Teledifusão de Macau (TDM) Lo Song Man signed an agreement for the continuing broadcast in Macau of the CCTV-5 sport channel, providing local viewers with high-quality coverage and the biggest sporting competitions.

October 7, 2022
In the early hours of Monday this week, US resident Alan Bigger submitted the last...
Load more