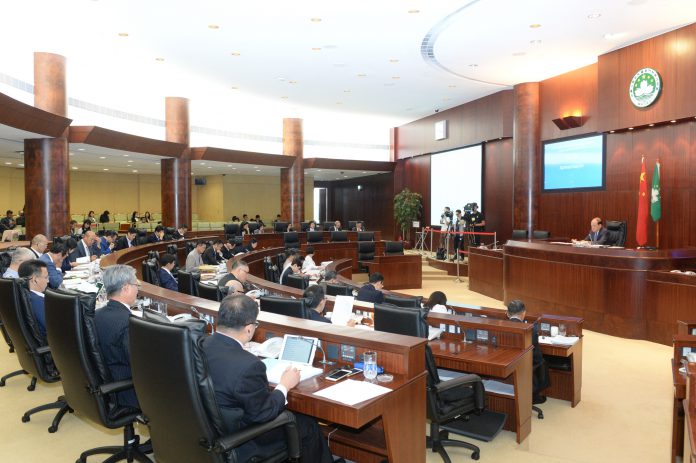 Macau (MNA) – The Secretary for Administration and Justice, Sonia Chan Hoi Fan, emphasised on Monday at the Legislative Assembly (AL) that there is no discrimination over non-Chinese judges with the revised bill of the Judiciary Organisational Framework Law suggesting only Chinese judges would be appointed to handle cases related to national security.

The plenary session at the AL on Monday discussed the first reading of the newly revised bill.

Pan-democratic legislator Ng Kuok Cheong questioned the necessary appointment of Chinese judges for the cases, although overall he agrees the revision of the bill.

“I didn’t see the central government has issued such requirement [of appointing Chinese judges],” said legislator Ng, while adding that similar law is not implemented in Hong Kong.

In response, Secretary Chan noted that similar regulations are implemented by governments from other countries, while stressing that there is no doubt about the capacity of non-Chinese judges.

“We have absolute trust on non-Chinese judges’ ability,” stated the Secretary, saying that cases related to national security is a matter of the nation’s core interests with high sensitivity, hence the revision of the law to safeguard such interests.

Legislator Ho Ion Sang, in support of the bill regarding the appointment of Chinese judges, opined that ‘one country’ should always come first followed by ‘two systems’ when clashes of interests appear.

Meanwhile, legislator José Maria Pereira Coutinho questioned the reason why cases that involve the Chief Executive (CE) would only be ruled by the Court of Final Appeal (TUI) without any rights to appeal.

The new bill suggests that high officials in the city involved in lawsuits would be able to enjoy rights to appeal, with cases to be first handled by the Court of Second Instance (TSI) and then proceed to appeal at the top court if needed.

Given the significant and special position designated to the CE, the Secretary perceived that it is appropriate to have lawsuits with the involvement of the CE to be first handled by the top court.

On the other hand, the plenary session has turned down the debate motion by Mr. Coutinho on whether the government’s initiative to increase fines on illegal parking would improve the issue of parking space shortage in the city.

Agnes Lam Iok Fong perceived that the majority of legislators would not agree with the government’s policy in solving the aforementioned issue, saying that the motion would hence be impractical without the affirmative party.

December 8, 2022
It's quite unusual for an offbeat dish to gain popularity on a national level, let...

December 8, 2022
One of the bombmakers in the Bali blasts that killed more than 200 people two...
Load more