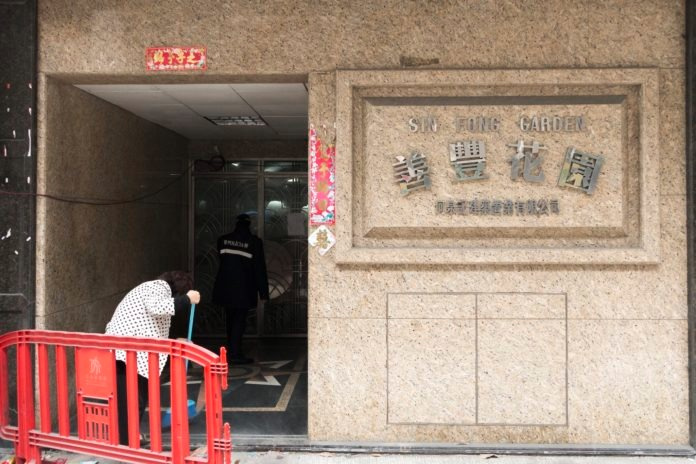 Researchers from Macau Polytechnic University (MPU) indicated in a research project that the Sin Fong Garden – which was abandoned for almost 10 years due to structural issues with reconstruction work finally completed recently – is an example of governance failure, the non-institutionalization characteristic of the local civil society and of an insufficient legal system.

On October 10, 2012, the Sin Fong Garden located at the seaside street in Patane, suffered a sudden major structural damage and the residents of the building were evacuated and left homeless.

However, further dissatisfaction among the owners was triggered as the final investigation of the cause took longer than expected with a conclusion drawn to be insufficient concrete strength, which has finally led to major mass incidents with the owners “occupying” the nearby road and even shouting slogans to ask the Chief Executive to step down.

In a case study of the incident, the MPO researchers – Lou Sheng Hua and Tang Chun Lin – pointed out that the low administrative efficiency of the government especially in the investigation process, had caused the owners who were “homeless and had high hopes for the government”, to feel “intolerable” and “eventually took to the streets”.

Moreover, the scholars stressed that the government failed to clarify its role in the intervention, as at the beginning they intended to cover everything with active relief measures provided to the owners, but later kept silent on the follow-up development of the incident since the seriousness and complexity of the case went ‘beyond their imagination’.

The government is the regulator of construction quality and has the responsibility to find out the cause and of the damage to the building, Lou and Tang indicated.

The researchers also emphasized that victimized owners should take their part of the responsibility, and the government should only play a relief and facilitator role with some additional assistance provided, including preferential treatment on tax, property registration, and judicial assistance.

Meanwhile, Macau Jiangmen Communal Society, one of the civil societies which have for a long time served as a quasi-government organization in the city, failed to implement the decision of donation and reconstruction when participating in the governance of this incident.

In 2018 the association – headed by legislators Mak Soi Kun and Zheng Anting – vowed to support about half of the MOP200 million in estimated costs for the reconstruction.

However, in 2020 Mak revealed that due to the pandemic impact on the local economy the association would be unable to fulfil this promise.

The research considered that the sudden loss of funding has put the reconstruction of the building in limbo for a period of time, and this result was caused by the undemocratic decision-making process of the Macau civil societies.

Lou and Tang posited that this inability of the Macau Jiangmen Communal Society to honour the donation reflects a gap in the legal aspects of charitable donations in Macau and issues surrounding the management of local civil society associations.

‘When people examine their donation behaviour, they inevitably have to question their ability and willingness to donate. As a society that was established after Macau’s handover and has a short history, did the Macau Jiangmen Communal Society have enough financial resources to make donations?’ the study noted.

Although many society members would oppose the donation in the incident, it did not affect the outcome of the decision since it is made by the personal will of the ‘big boss’ who controls and provides operating resources for the association, Lou and Tang stressed.

‘In the Sin Fong Garden incident, a striking phenomenon is that the first person
who announced the donation to Sin Fong Garden on behalf of the Macau Jiangmen Communal Society was the founding president of it. In fact, he has never served as the chairman of the civil society.’

According to the unspoken rules of “who pays who speaks‟, it is often difficult for others to have a say since the expenses generally can only come from the leaders of the associations, the MPU scholars emphasized.

The researchers noted that since Macau civil societies normally do not charge membership dues or only a small amount of membership dues funding mainly comes from two sources, one is the sponsorship of the community leaders, and the other is government funding, whit its use generally limited.

Also, the study indicated that the Sin Fong Garden incident has highlighted the problem of lagging laws in building construction and management, since Macau as a civil law region does not have a written law to solve related problems.

In addition, according to Article 491 of the Macau Civil Code, the right to claim damages shall be completed within three years from the date when the victim learns or should have learned that he has the right and the person responsible.

However, the Sin Fong Garden case shows that the statute of limitations for civil damage claims is “obviously not enough” in complex construction safety incidents, Lou and Tang stated.

There are no laws and regulations on mandatory building inspections, otherwise, the owners can find potential safety problems in the buildings as early as possible and repair them immediately to avoid serious accidents, the study points out.

After almost 10 years since having to abandon the building due to structural issues, the residents in Sin Fong Garden have returned to the reconstructed building to inspect their brand-new homes.

The property was rebuilt in line with its original floor plan on the same site, some 30 storeys, 144 flats, 48 car parking spaces and a shop on the ground floor, with the committee noting that almost all house owners have received their respective keys.

US, Taiwan to launch formal trade talks in autumn

August 18, 2022
The United States and Taiwan announced on Wednesday objectives for trade negotiations set for...

‘No use worrying’: Taiwanese tourists carry on despite tensions